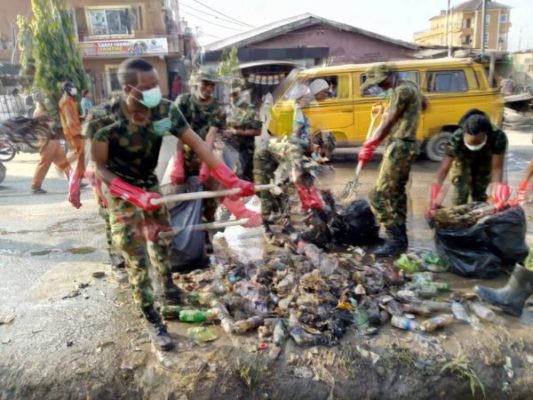 The Nigerian Airforce, Sam Ethan Airforce base Ikeja, strengthens its existing relationship with Oshodi-Isolo Local Government by reaching out to the council officers in free medical care and to community in environmental sanitation exercise.

The free medical outreach for the council officers was led by the LG Chairman, Hon. Bolaji Muse Ariyoh and the House Leader, Hon. Rasheed Obasa, which kicked off by 8am and lasted for four hours.

Echonews gathered that apart from the core mandate of the military to protect and uphold the nation’s sovereignty against external attacks and internal subversion, they have also taken it upon themselves to engage in community sanitation.

However, the council boss assured the community of adequate security while promising more dividends of democracy to the grassroots.

The residents of the communities sanitized were full of appreciation to the men of the Airforce and solicited more of the collaboration.