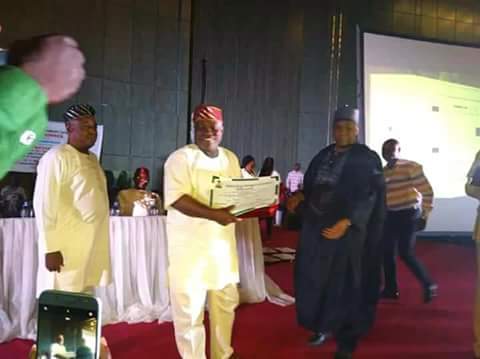 It is an honour well deserved! Obe deserves the awards! Obe is our man, you have made us proud. Up up Ejigbo LCDA! These were some of the positive comments by the people of Ejigbo Local Council Development Area (LCDA) as the Executive Chairman of the LCDA, Hon. Monsurudeen Oloyede Bello (Obe) received Presidency Award of Honour as the Best Performing Local Government Chairman.

The 2018 Presidential Performing Local Government Award was presented to Bello at the International Conference Center in Abuja on Wednesday.

The award is in recognition of good corporate governance, accountability of public funds, evaluation and utilization of funds to the third tier of government which has produced development of public infrastructure in the local government area in the last one year. 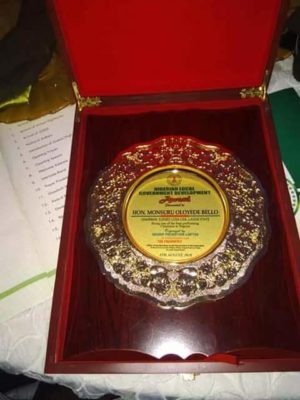 Commending the Chairman for the award, the Lagos State Commissioner for Information and Strategy, Hon. Kehinde Bamigbetan, who is the former Ejigbo LCDA Chairman, said he was not surprised that his successor took the award based on the rate at which the local government area is being developed in terms of socio-economic and infrastructural development.

According to him, Obe has not detailed from the legacy left behind by his predecessor as this has been helping him to move the community forward.

Also congratulating the LCDA boss, the Secretary to the Local Government, Ejigbo LCDA, Hon. Omatseye Paul Fregene said, “On behalf of the cabinet members, legislative members, management staffs and all members of the All Progress Congress in Ejigbo, I Congratulate you sir on this award of yours and pray that God Almighty will continue to grant you more leadership wisdom in Jesus name.”

The Chairman, ADA Development, Lagos branch, Mr. Fidelis Taylor, who expressed his joy at the award said it is award for hardworking which, according to him, could get better and better.

Congratulating Obe on behalf of his people, Taylor said, “We the people of ADADAMA_ABI Development Association, Lagos sent in our warm appreciation to the able Chairman, on this great achievement, we say more Grace to greater excellence, may the Lord bless you sir.