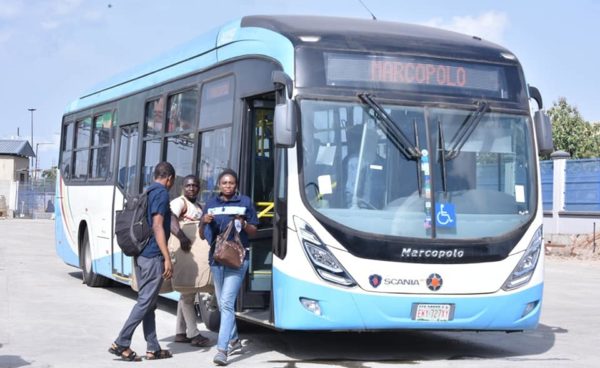 It is not less than one million passengers that would be travelling through the newly built Oshodi Transport Interchange on daily basis by the time the three terminals begin full operation while the project would create about five thousand direct jobs, Echonews gathered.

Already, full operation has begun at Terminal 3 with about 825 luxurious buses equipped with internet facilities and seat-side charging port available for operation to convey passengers to and fro Lagos Island and environ.

This followed the commissioning of the project and some others by President Muhammadu Buhari on Wednesday April 24.

Speaking with Echonews about the project, the Head of Records and Statistics/Project Administrator, Planet Project Ltd, Mr. Abayomi Solaja disclosed that the other two terminals would also be ready in two weeks’ time as well, and begin full transportation operation before the expiration of office of the current state governor, Akinwumi Ambode.

According to him, Terminal 1 which is for inter-state transportation would accommodate 34 out of 36 states and the Federal Capital Territory (FCT) for a start; Terminal 2 is for transportation to and fro Lagos Mainland while Terminal 3 is dedicated for the passengers on the Lagos Island.

“Interestingly, the prices for these travels are the cheapest compared to other means of travelling. The people are bond to enjoy more value in terms of comfortable and memorable transportation for lesser amount,” he said.

He said: “As the governor established and buttressed by our Managing Director, there was a test-run of activities at the third terminal on May 1st and by May 2nd, full operation began. All things being equal, in the next two weeks, terminals 1 and 2 will be operational. Proofs do not lie, the proof is there for everybody to see that operation has begun already and before the present administration hands over power, the other two terminals would have begun operations as well.”

Speaking about the facilities, Solaja explained that the project is equipped with world class facilities in order to transform Oshodi to a world class transportation centre and change the narrative of public transport in the state.

He said: “The facilities we have here are comparable to any terminal in the world and this is to change the narrative of transportation in Oshodi from the traditional chaotic way and attest to the mega city status of Lagos State.

“As designed, the facilities are comparable to any other terminal in the world in terms of security, safety and comfort. There are Close Circuit Televisions (CCTVs) installed in and around the facility, 18 lifts, that is 6 for each terminal. There is Intelligent Transport System (ITS) in each terminal to enable the passengers predict the time when the next bus would arrive. There are also escalators installed in each terminal. The facilities are numerous, but I can tell you that they are what make a project world class.

“The prospect is turning Oshodi to a tourism centre with the magnitude of facilities put in place. The project is designed to have about 1,000 lightening effects to compliment the aesthetic of the community, especially at night. You can be assured that people coming from all over the world can have the Disney-sense about the terminals especially at night with the endearing reality of this project.”

He continued, “Evident to the world class status of the project, it also boasts of an exquisite lounge, a classical one which most airport terminals don’t have and this is to take care of the hospitality of the passengers. The skywalk is one of its kinds as it is 159m long. The project is built to make travelling safe, secure, comfortable and more reliable.

Meanwhile, Solaja said that the project is built to accommodate any transformation as regards increase in immigration to the state for the next three decades, as such was put into consideration.

He however urged the incoming governor, Mr. Babajide Sanwoolu to consolidate on the progressive efforts of the outgoing administration and ensure such signature of a mega city is replicated across the state as seen in some other areas.