…as APC poises to sweep pools 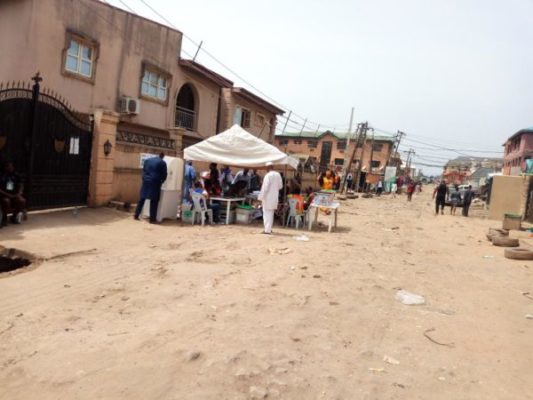 Compared to the last Presidential/National Assembly elections, the governorship/state house of assembly elections in Lagos and particularly in Oshodi-Isolo went on peacefully.

However, the process recorded high level of voting apathy; there was low turnout as electorate refused to come out to exercise their electoral right.

This, according to some people who spoke to Echonews, was due to the fear of what happened during the previous elections in which some people were maimed at some polling units in Okota area of Isolo local council area. 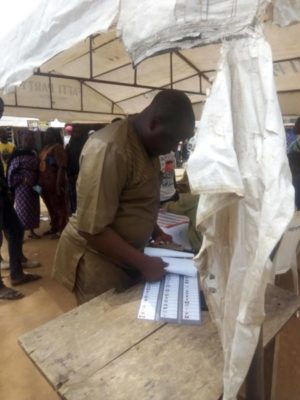 Although the officials of Independent Electoral Commission (INEC) did not arrive at some polling units, this could not be the reason for the low turnout as those who were ready to cast their votes were already at the polling units even before the arrival of the INEC officials.

The Lagos State Commissioner for Information and Strategy, Mr. Kehinde Bamigbetan, who cast his vote at exactly 12:44pm at his polling unit 021, Powerline Street, Ejigbo attested that the electoral process was violence-free.

He said people came out at his own polling unit, and that the electoral officials came on time.

Anticipating the outcome of the election, Bamigbetan was full of assurance that his APC party would win the elections.

At the polling unit 023, Apena ward, Ago Palace Way, Okota Isolo, where crisis truncated the electoral exercise and the ballot box set ablaze during the last presidential/national assembly elections, there were handful of security personnel to forestall any possibility of electoral disruption, while a closed circuit television (CCTV) was mounted to electoral proceedings.

According to a voter, Babagbemi Rasak, the INEC officials came on time, compared to last time.

He maintained that the turnout was low compared to last one.

Attesting to the credibility of the process, the Leader of Isolo LCDA Legislative Arm who represents Apena Ward Hon. Remmy Shittu Remmy also maintained that the process compared to the previous one began on time and was peaceful at his polling unit.

“Well, you know in the last election, INEC came very late and that delayed the process but this time around, they came on time and people voted in no time. The process has been very credible and I give kudos to INEC but, we want them to also improve further. I give them 80 percent.

“There has been no issue of electoral violence or any form of hiatus in the election process. The cards readers are perfectly working, the staffs are very professional.”

Equally speaking, the APC Isolo LG Chairman, Barr. Gani Bello, who voted at polling unit 004, noted that “the exercise was so good and successful. Although, we started on a very dull and drab note because INEC refused to release their ad-hoc staffs. We learnt from sources that the staff were protesting over nonpayment of allowances. That is really unfortunate, it’s a national embarrassment. INEC budget has been approved since 2018. There was no reason to delay the payment of allowances. We did not start here until past 11, just like in the previous election. But, after we started, people began coming but regrettably, of all people that went back home not all of them came back to vote.”

“Nevertheless, people really wanted to vote and you know in the last election we complained about apathy but in the last two weeks we’ve done a great ground work among the people and they showed enthusiasm to vote only for them to come to see that INEC officials were not on ground.”

Meanwhile, as the process came to an end and vote counting started in various polling units, there was indication that All Progressives Congress (APC) was is at the leading position as the part has been recording highest scores for the both its governorship candidate, its House of Assembly candidate in Oshodi-Isolo and its Federal House of Representatives whose election was rerun in some 20 polling units across Oshodi-Isolo Loca Government Area.

Echonews will give details of the results later.