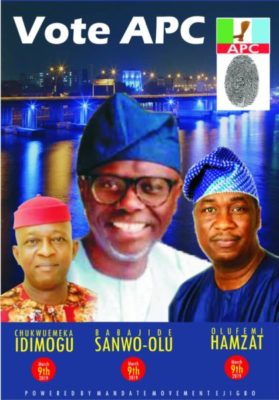 Seven hours after the conclusion of the elections on Saturday, the Independent National Electoral Commission, Oshodi-Isolo, finally announced the results after party agents, journalists and other stakeholders had been keeping vigil since Saturday night at the Owoseni Primary School, Oshodi, waiting curiously for the declaration of the winners.
The outcome confirmed bookmakers prediction that All Progressives Congress Governorship candidate Babajide Sanwo-Olu would sink his toughest rival, Jimi Agbaje of the People’s Democratic Party, thus, turning his third attempt to govern Lagos into a Waterloo.
At exactly 11: 23am on Sunday, the gubernatorial result was announced for the Oshodi-Isolo Local Government Area. The curious APC members went into jubilation when the Returning Officer, Dr. Khalid Adekoya, announced their candidate, Babajide Olusola Sanwo-Olu as the winner in Oshodi-Isolo with 39,945 votes out of total votes of 55,662 votes. 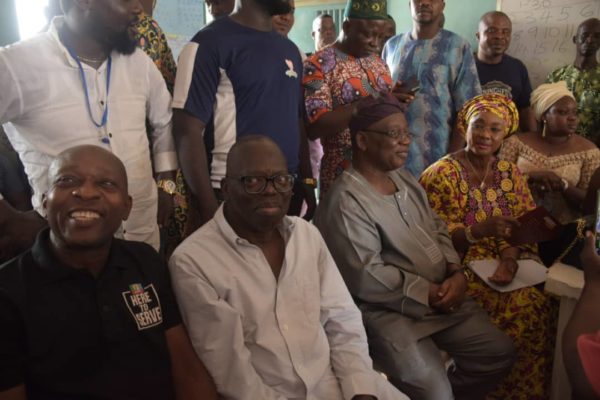 Ganiyu Johnson and other party members waiting curiously for the announcement of results at the collation center, Owoseni Pry School, Oshodi
Sanwo-Olu defeated  Jimi Agbaje who scored 12,585 votes with the margin of 27,360 votes.
Out of the 55,662 total votes, 54,310 were valid and counted while 1,352 votes were rejected.
An hour later, the State House of Assembly result was ready. For Oshodi-Isolo Constituency II, as announced by the Returning Officer, Prof. Luqman Adams, a lecturer from the  University of Lagos, out of total votes of 33,383, the APC candidate, Hon. Jiude Idimogu, scored 21,080 votes to carpet his PDP contender, Erinfolami Lateef, who scooped total votes of 7,280 to become first runner up.
The election of who to represent the Oshodi-Isolo Constituency II in the Lagos State House of Assembly was held in six political wards. In Isolo ward, APC scored 3,226 votes out of total valid votes of 5,184, while PDP scored 1,557 votes, 232 were rejected votes while the remaining votes were shared among other 14 parties that contested in the election.
At Ajao Estate Ward, the winning party got 1,062 vote to beat the PDP with 663 votes. APC also won at Ilashamaja Ward with 2,953 votes over its contending PDP party which got just 902 votes. 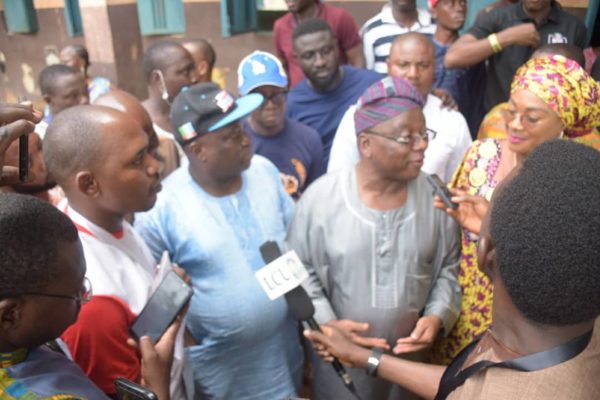 Ganiyu Johnson, addressing journalists after being declared winner at the collation center
At Okota and Ishaga Wards, APC scored 2,613 and 1,863 respectively to beat the PDP that scored 1,629 and 794 in the two wards respectively.
The game changer Oke-Afa/Ejigbo Ward as APC scooped a total votes of 9,363 out of the total votes of 12,922, while PDP got a watery vote of 1,735. The total valid votes were 12,172 while 750 votes were rejected.
In Oshodi-Isolo Constituency II, the APC candidate, Hon. Olusola Shokunle also won the election with the total votes of 16,723 against his PDP challenger, Olumuyiwa Owadara who got 4,936 votes.
Due to some irregularities that marred the last Presidential/National Assembly elections at some polling units, there was rerun election to the Federal Houses of Representatives in 20 polling units and 28 polling units in Oshodi-Isolo constituencies I and II that went simultaneous with the governorship elections on Saturday.
Engr, Ganiyu Johnson of APC, Oshodi-Isolo Constituency II, who earlier scored 19,426 votes to beat his PDP challenger, Hon. Emmanuel Nnodimu with 15,872 votes, finally coasted  home to victory after the announcement of the rerun results.
With the rerun election, Johnson got total votes of 21,484, while Nnodimu eventually got 16,817 votes.
In the analysis of the ward to ward results of the rerun election, at Isolo Ward, APC scored 3,909 votes while PDP got 1,925 out of total votes of 6,262.
At Ajao Estate and Okota Wards, PDP won with 1,710 and 3,706 votes while APC scored 1,115 and 2,824 votes respectively.
The result of Ilashamaja and Ishagatedo Wards favoured APC, out of total votes of 5,817 in Ilashamaja, the party got 2,989 while PDP scored 1,792 votes. At Ishagatedo, APC got 2,476 votes to beat the PDP with 1,999 votes out of the total votes of 7,277.
There was significant margin in the result of Oke-Afa/Ejigbo Ward as APC scored 8,171 out of 15,326 total votes while PDP got 5,645 votes.
For the House of Representatives rerun election in Oshodi-Isolo constituency I, APC was able to unseat the incumbent PDP candidate, Hon. Mutiu Shadimu, with total votes of 14,353 over the PDP’s 10,121 votes out of total valid votes of 24,893.
In the ward to ward analysis, APC got 4,911 at Bolade Ward while PDP got 3,095 votes; at Orile Oshodi Ward, APC scored 4,523 votes against the PDP’s 2,505 votes. At Mafoluku Ward, APC overrode PDP with 1,763 votes to 1,242 votes.
The PDP won with 2,068 votes at Shogunle/Alasia ward over the APC’s 1,760 scores; although the party, APC, claimed victory at Shogunle Ward with total votes of 1,396 compared to PDP’s score of 1,212 votes.
Immediately after the announcement of the results and the declaration of winners, the APC candidates and the party leaders waiting for the results at the collation center, especially those from constituency II expressed their joy over the party’s victory.
Among them were the former House of Reps member, Hon. Hakeem Muniru, who was the APC Returning Officer, the APC House of reps winner, Hon. Ganiyu Johnson, his State House of Assembly colleague, Hon. Jude Idimogu, Ejigbo LCDA Chairman, Hon. Monsuru Bello Obe, Isolo APC LGA Chairman, Barr. Gani Bello, the wife of House of Reps member-elect, Mrs. Funke Johnson and a host of other party members.
Speaking on his victory, Johnson said it was a landmark success for him and the entire party, saying the victory was facilitated by the party leaders.
He specifically appreciated the Isolo LCDA chairman for his effort towards the victory.
He  promised to uphold his manifesto and imbibe inclusive governance as he promised to embark on cleaner environment, empowerment programmes within his constituency, and sponsor Bills that would bring about development.
On his own part, Idimogu, who was also full of appreciation to all the party leaders and members who had worked tirelessly  for his re-election, said he was not afraid of winning the election but the margin.
He said he was confident of winning the election since he joined the party, saying: “I didn’t make a mistake when I joined the right party. From day one, I was not afraid of winning but the margin.”
Meanwhile, the LCDA chairman, Bello said the reason Ejigbo has been delivering greater number of votes to the party is that it practices a grassroots engagement, carrying all the people at the grassroots along the politics of the community.
He therefore promised to sustain the feat by multiplying the votes in the community during next elections.
Also commenting on the rerun victory, the party Returning Officer, Muniru said after the first election, the party restrategized to make sure it did not only win at the rerun, but won with greater margin which he claimed the party eventually achieved with ease.
Muniru, who lost the reps seat to the PDP candidate in 2015, also expressed joy that the party was able to reclaim the position he lost to the opposition party in 2015.