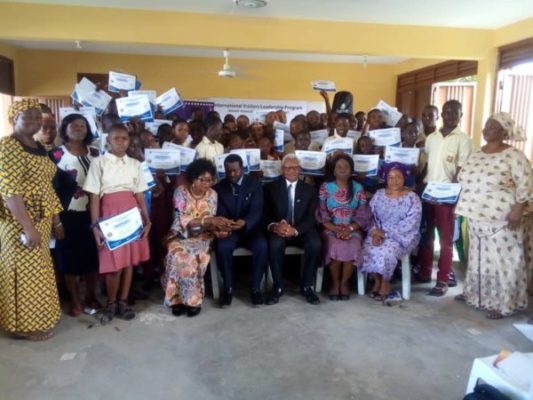 The six weeks mentorship programme which kick-started  in the school on Monday March 11, 2019 running across leadership, Education, Choices and Evaluation programmes for the young and vibrant pupils, had the ground finale and award ceremony on Wednesday June19, 2019.

The interim President Consulate, Lagos chapter, Mrs. Omowale Ogunrinde, explained that the essence of the programme is to develop academic excellence in the students, to expose the students to opportunities outside school, and motivate them to aspire for good life.

According to her, “The programme is to give opportunity to the students, improve their skills and help them in their choices in life. They’ve learnt to be able to weigh situations and to take decisions on their own.”

She further said that six public schools in Lagos has benefited from the programme, two schools in the first batch and another four in this batch.

The Public Affairs Officers, United State Consulate, Mr. Russell Brooks, who represented the Consulate General from the US, encouraged the students to be more studious so as to be able to stand out among the best all over the world, stressing that, “No one should make you feel inferior about yourself without your consent. To get ahead in life you must think ahead, do something about your future.”

The leader of Isolo Legislative Arm, Remy Shittu, who explained to have benefited from the programme during his visit to the United State, stressed that he had facilitated the programme to his community as part of his campaign promises during electioneering.

He established that, the program will no doubt help raise educational standard in the community, saying he chose Central Senior High School, Okota for the programme based on the virtue of its uniqueness and fame for academic excellence.

He disclosed that the US government would pick the students based on discretion to decide who among them would be called to study in the United.

The students however, got the certificates of participation and hamper of educational material.