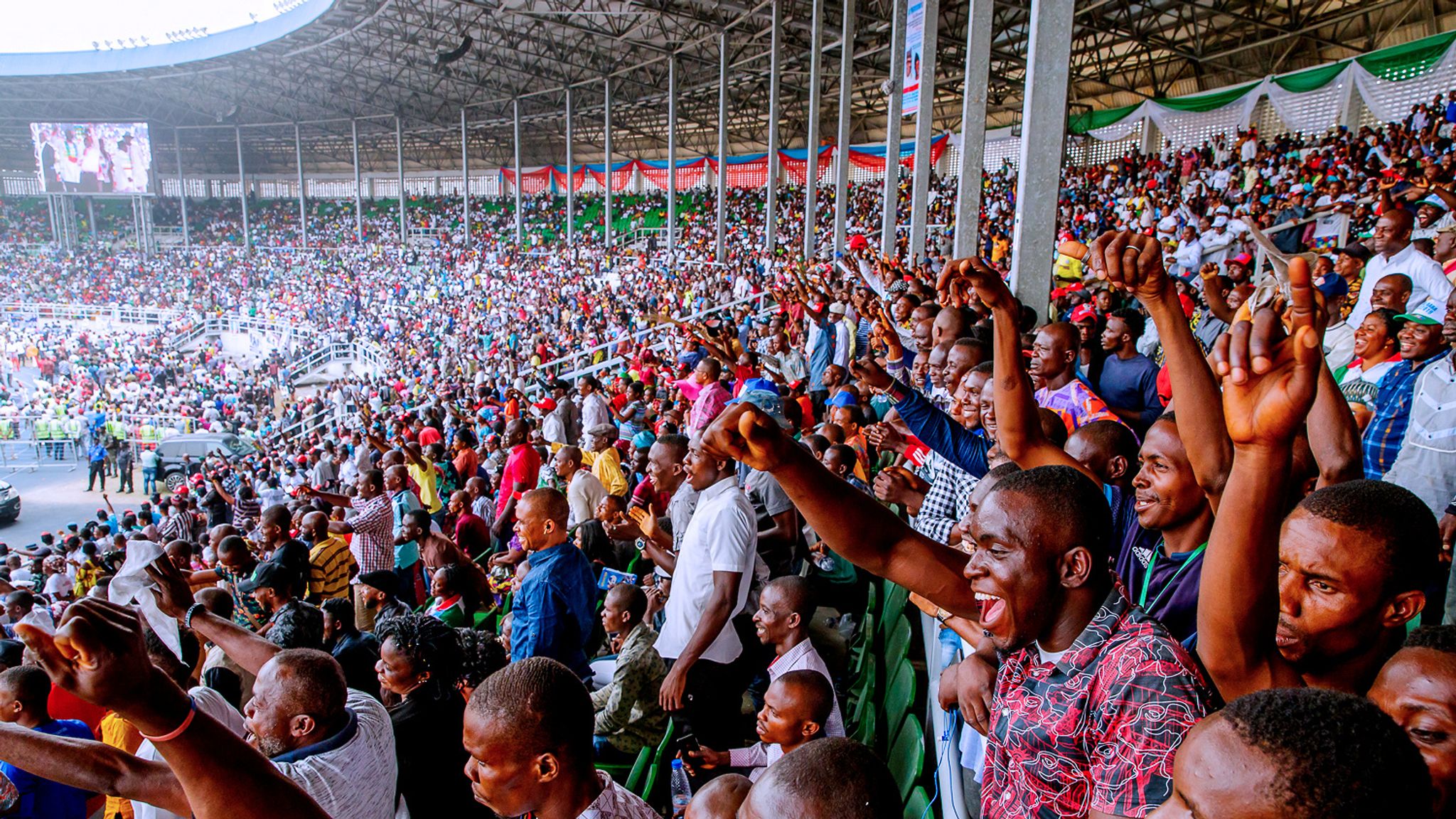 Despite being empowered by law, the Independent National Electoral Commission (INEC) has not been able to prosecute any of the political aspirants violating the campaign rules.

As political activities started to build up, some political parties and aspirants and their supporters have despised the commission going against its guidelines by flying campaigns and rallies before being authorised to do so.

According to the Commission as contained in its guidelines back up by law, no political party, its aspirants or supporters are allowed to embark on any kind of political rally, campaign or procession prior to the announcement of election dates.

In the guidelines, the 3rd Schedule, Paragraph F, 15(f) of the 1999 Constitution empowers the Commission to “monitor public political campaigns, rallies and processions and provide rules and Regulations which shall govern political parties, as well as keep records of the activities of all Registered Political Parties.

As defined by the INEC, an aspirant is any member of a political party seeking sponsorship and support to be a candidate for an elective office in an election.

It explained that “Aspirants seeking sponsorship as candidates can solicit for (sic) support from their political party members by holding private fund raising, receptions, courtesy calls, visits, display of party flag, emblem, slogan, posters, billboards through traditional or new social media platforms (such as the internet and related social networks) provided such aspirants do not solicit for (sic) votes or advance their aspirations for any specific elective office before the release of the timetable for elections by the Commission in compliance with Section 99 of the Electoral Act 2010(as amended).

“Political party members wishing to be sponsored or nominated as candidates for elective office may aspire for sponsorship under the platform of their political parties by way of holding rallies, processions, fund raising, receptions, courtesy calls, visie, distribution of hand bills, display of party flags, emblems, slogans, posters or billboards only at the Headquarters of the political party office, ward, local government and State offices throughout the Federation, that aspirants do not publicly solicit for (sic) votes for any specific elective office throughout the year before the release of the Timetable for Elections by the Commission,” it stated.

In February, this year, INEC presented the new electoral timetable and schedule of activities for the 2023 General Elections.

According to its chairman, Mahmood Yakubu, the commission had to change the initial timetable following the signing of the amendments to the Electoral Bill by President Muhammadu Buhari.
The commission had earlier announced February 18, 2023 for the presidential election.

With the new timetable presidential and National Assembly elections have been slated for February 25, 2023 while governorship and state assembly elections will now be held on March 11, 2023..

The INEC chairman said the Commission was waiting for the president’s decision on the bill before releasing its schedule of activities for the 2023 poll.
He said the new dates are in conformity with the INEC’s aim of ensuring certainty in its electoral calendar.

“Therefore, the Electoral Act 2022, together with the Constitution of the Federal Republic of Nigeria 1999 (as amended), form the legal basis for conducting all elections in Nigeria. In particular, the Electoral Act provides strict timelines for the implementation of electoral activities based on the date of the General Election. One of the significant timelines is the publication of Notice of Election not later than 360 days before the day appointed for holding an election which has now lapsed for the 2023 General Election.

“Consequently, the Commission has decided to adjust the dates of the 2023 General Election to ensure compliance with the provisions of the new law. Accordingly, the Presidential and National Assembly elections will now hold on Saturday 25th February 2023 while the Governorship and State Houses of Assembly elections will hold two weeks later on Saturday 11th March 2023. With this adjustment, the 2023 General Election is now 363 days away,” he said.

Before the new dates, both the Governorship and State Houses of Assembly elections were slated for March 4, 2023.

Mahmood said the commission would publish the notice of election across its offices in the country on February 28 while political parties have from April 4 to June 3, 2022 to conduct their primaries and ensure resolution of disputes from the exercise.

Last day of campaign by political parties for Presidential and National Assembly elections is midnight of Thursday, February 23, 2023.

While the last day of campaign by political parties for Governorship and State Assembly elections is midnight of Thursday, March 9, 2023.

And in accordance with the INEC guidelines, no political party, aspirant or candidate is allowed to embark on any campaign before the day scheduled for such by the commission.

However, the guidelines have been violated as many aspirants have embarked on such campaign aided by their supporters without being checked by the Commission as contained in its guidelines.

It stated that political campaign can also be conducted by way of processions, rallies, media advertisement, posters, handbills, billboards, and house-to-house contacts with voters, etc. within the time frame of 90 days before election in accordance with the law.

The Commission explained that “illegal campaign shall be all campaigns, rallies, processions, fund raising, public advertisement on land, air or waterway by public or private media organisations; use of public places to display posters, billboards or handbills; public use of private and public vehicles or public address in images, audio or video; use of social media to project aspirants, candidates or political parties before the release of timetable for election and before 90 days to a general election.

“llegal campaign shall include campaigns by associations not registered as political parties.”

“In order to monitor campaigns through social medic, the commission shall from time to time require website of candidates and/or political parties to file affidavits about their social media sites in a prescribe form issued by the commission that will include, but not limited to, the following intonation: Contact telephone number(s); E-mail addresses; Webpage addresses and those of their sponsors; Social media accounts and those of affiliates/supporters; and Details of social media sites over a period of time.

“Every political party, aspirant, candidate and supporters of such candidate, aspirant and political party intending to issue information or political advertisement for purposes of campaigns, rallies or procession on television channels, radio/electronic media, cable television, the Internet or specific social media shall apply to the Commission for pre-certification of such political campaign, advertisement, rallies and procession before the publication on all electronic and social media in compliance with Section 99 of Electoral Act, 2010 (as amended).

“Advertisement, promotional campaign contents posted on social and/or electronic media without pre-certification with the Commission, by candidates, political parties and supporters in breach of the law on campaigns/advertisements shall be fined in accordance with the Electoral Act of these Guidelines.

“To ensure correct estimates of expenses of every campaign, the Commission may from time to time request media houses to provide it detailed information about the political advertisement expenditures by aspirants, candidates, parties, entities, individuals or supporters. It shall be the responsibility of aspirants, candidates and political parties to ensure that correct records are kept in their transactions with media houses and that media houses provide such information when requested by the Commission.

“Party agents, candidates, supporters, accredited election observers, individuals, organisations, entities or the media may report violations of campaign rules or these Guidelines to the Commission with a sworn affidavit.

“Every candidate shall submit to the Commission copies of all his/her campaign materials. Copies of receipts indicating the cost of the materials shall be attached to the audited accounts of the campaign expenses.”

Political analysts wondered why the Commission has not prosecuted those who violate these rules, noting that some political parties and their aspirants are culpable.

However, observers are of the opinion that the change in the commission’s timetable may be responsible for the non prosecution of violators of the its guidelines.