Women leaders back Ariyoh on Fed House of Reps ambition 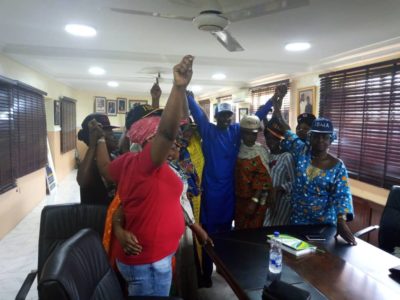 Following the declaration by the Oshodi-Isolo Local Government Chairman, Hon. Bolaji Muse-Ariyoh to run for Federal House of Representatives in 2019 to represent Oshodi-Isolo Constituency I, the All progressive Congress (APC) ward women leaders across seven wards in Oshodi have pledged to support the aspirant.

During their visit to the council yesterday, the leader of the group, Mrs. Modupe Adebayo stated that the women have endorsed Ariyoh’s candidacy for House of Reps and that they would galvanize support to facilitate the actualization of his goal after the primary election.

Responding, Ariyoh, who harped on his the achievements so far as the LG Chairman, charged the women leaders to use their political clout to intensify campaign fir his candidature in their various wards.

He also saddled the seven ward women leaders with the responsibility of coordinating the sensitization of the grassroots to get their PVC and also vote enmass for all APC candidates during the general election.

He used the avenue to disclose his administration’s next plan to work more on road construction which posed greatest challenge to Oshodi local government.

He declared that the on-going construction work embarked upon by the state government has really put more pressure on inner roads which must be fixed to measure the margin by creating accessible roads to make Oshodi worthwhile.