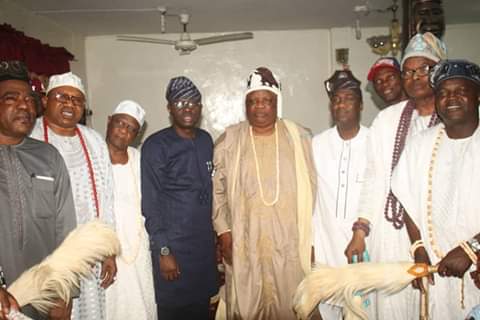 The traditional rulers in Lagos have warned the All Progressives Congress, APC, governorship candidate, Babajide Sanwo-Olu, not to turn his back against them when elected as the governor of the state in 2019.

This warning was given on Friday at the palace of Osolo of Isolo, Oba Kabiru Adelaja Agbabiaka, during his (Sanwo-Olu’s) visit to the monarch as part of his consultation of royal fathers ahead of the kick-off of his campaign.

In his keynote address, Oloworo of Oworo Kingdom, Oba Bashir Soliu Elobo, while welcoming the APC gubernatorial candidate to the midst of the traditional rulers, noted that the visit portends a good relationship between the “in-coming administration” and traditional institutions across the state.

Oloworo, while appreciating the APC candidate for seeking royal blessings on his ambition, enjoined him not to close his doors against royal fathers when he eventually becomes governor.

The monarch, however, made a list of requests from the APC candidate when he eventually becomes governor.

These include creation of employment for youths in Awori land to reduce the burden on their parents as well as a total review of the controversial land use charge which has been vehemently opposed by majority of Lagos landlords.

The monarch also called on the APC candidate to pay adequate attention to the bad condition of roads across Lagos metropolis.

He assured Sanwo-olu of the support of the monarchs in the forthcoming general elections, adding that as heads of their respective domains, the task of mobilizing massive support for the APC candidate is a done deal.

In his response, Sanwo-olu thanked the royal fathers for the warm reception he received in Isolo and their strong assurance of mobilizing electorate for his victory in their respective domains.

He vowed to ensure that all requests are met when he eventually becomes governor in 2019.

He added that this promise can only come to fruition if he wins the election.

He, therefore, charged the traditional rulers and residents to mobilize for his eventual victory to continue to enjoy the development programmes of the APC in the state.

Sanwo-olu stated that though he was confident of winning the gubernatorial election, he is still banking on the support of the royal fathers to carry the day.

Among the traditional rulers in attendance during the visit are Osolo of Isolo, Oojon of Ejigbo, Oloworo of Oworo, Elewu of Ewu, Alagege of Agege, Alaketu of Ketu, Olota of Ojota and Oba of Shangisha/Magodo.