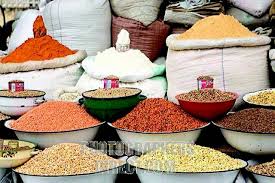 Traders in Isolo market especially those who deal in foodstuff have lamented low sales during Ramadan – Islamic fasting month.

They complained that people did not patronize them as expected thereby making them lose profits.

A foodstuff seller, Chinedu, who talked to Ehonews said people did not buy during the day until evening and that they reduced their purchasing rate despite the fact the prices of some food items had dropped.

According to him, a bag of rice that was sold at the rate of N14,500 had dropped to N13,500 but people did ot buy still. He explained that those who bought like three Dericas of rice on normal day when there was no fasting reduced it to just one.

Traders in other goods such as pepper, meat and even fruits made the same complaints.

On the reason for the situation, the traders said they could not explain what caused it, probably, as they said, it might due to non-inflow of currency in circulation. Some others believed that it was due to the fact that people do not consume much during the fasting period.