As people celebrate season of love world over, the wife of the Executive Chairman of Oshodi-Isolo Local Government, Mrs. Sarah Bolaji Muse-Ariyoh, has decided to take her love to the less privileged children as she visited Out of School Children Home, a Non-Governmental Organisation (NGO) that caters for the downtrodden and less privileged children, to mark  the significance of the day with the vulnerable  children. 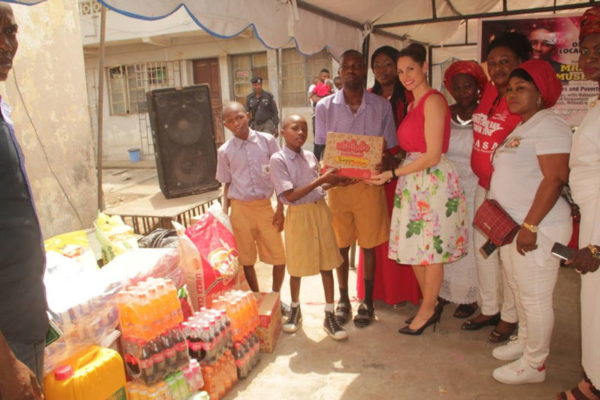 This, according to her, was in commemoration of this year Valentine Day which is celebrated globally.

The Wife of the Chairman, who donated food stuff and other essential commodities to the Organisation declared that she decided to celebrate with the vulnerable children in the community in order to l give them sense of belonging and hope that they were not alone and to make them realise that she and many other people in the society shared in their pains and challenges.

She stated that the aim of Valentine is to show genuine love to one another as she promised to always support the home.

Meanwhile, the Director of the NGO, Kelani Akeem, explained that the purpose of the Organisation was to cater and give life back to the down trodden and vulnerable children by ensuring that they have access to education.

He therefore expressed his joy and appreciation towards the gesture by by the first lady.

He said, “I am glad that the Wife of the Executive Chairman of Oshodi-Isolo Local Government and other local government officials have also come to share with our dream of giving life and hope back to the out of school children in our society, which the NGO cherishes so much.”

The children expressed their happiness as they danced with the wife the executive chairman.