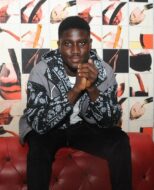 An upcoming performing musician, Sanni Hussein Opemipo popularly known as Fash Boy Omo Alhaja Alalubarika would launch his first ever video album scheduled to hold on Sunday at the Lekki Phase One, Lagos.

Addressing the journalists in Lagos, Fash Boy said he was delighted that his video album titled’ Sarafina’ would be launched on Sunday and thanked his mother, brothers and family members for their support showed to him since he started his music career .

“I thank God that my video launching is coming up on Sunday. Most of my fans have been calling me when would I launch my first video and I told them that it would come out very soon. I thank God and my family for the success of the video production and by Sunday, it would be officially launched,” he said.

The Hip Hop artist said he has been in the music industry for some years noted that he is happy that his song is acceptable by the people of Nigeria.Fash Boy said his target is to become one of the famous musician not only in Nigeria but world at large in the nearest future.

“I see myself at the world stage in the nearest future. Aside this, my song would be acceptable not only in Nigeria but at the global level. This is beginning and I strongly believe that with time, I would become well known in Nigeria. I need the supports and prayers of my fans so that I can achieve my target in the music industry,” he said.

Asked if his music profession is not affecting his academic pursuit, the 200 level student of University of Ilorin said he tried his possible best to ensure that his much career as not tampered with the studies. He said it is when he is less busy, he rehearses and composes song.

“I don’t joke with my studies and I don’t rehearse when I am in the class or school environment. Put music aside and focus on my studies. I only practice if I have concert or show in the school, “said Fash Boy a 200 level student of History department in UNIILORIN.

Meanwhile Fash Boy recently has performed in various places such as Imo, Abia and Lagos. The young artist has gradually gained the recognition based on his performances on his stage.