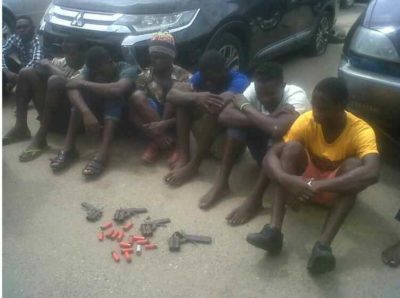 A six-man gang believed to be traders at the Ladipo Market, Mushin Lagos has been arrested and paraded by the Nigeria Police Force for their alleged involvement in armed robbery and cultism.

One of the suspects, Chukwuebuka l, had confessed their involvement in the offences charged against them and later took the SARS men to their hideout in NNPC area, Ejigbo where weapons such as pistols were recovered by the Police.

The house was resided by one of their leaders identified as Uzor, who was on the run.

During the parade, the suspects confessed belonging to various cult groups and mentioned their leaders who were still at large at the time of filing this report.

Other suspects, who were also paraded confessed to committing crimes ranging from car snatching, robbery, prostitution and others.

The Commissioner of Police, Lagos State, Imohimi Edgal, who joined other police officers during the parade said that efforts were being made to arrest other suspects, assuring that those already arrested would be charged to court.

Edgal also disclosed that the confession led to the recovery of four short locally made pistols and live ammunitions at their armoury.

He said that it also led to the arrest of other suspects at the mark.

He promised that the police would continue to do their best to reduce criminality in the society while soliciting continued support from the public.