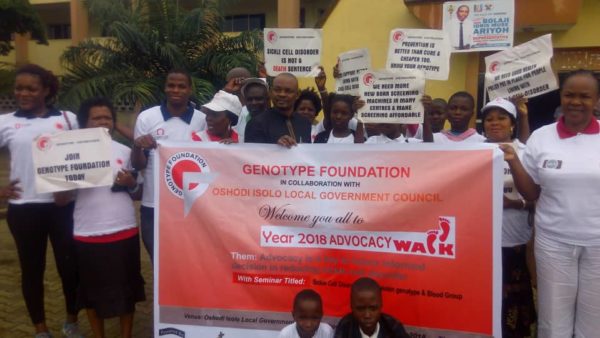 The lawmaker representing Oshodi-Isolo Constituency I at the Lagos House of Assembly, Hon. Hakeem Olusola Sokunle, has urged the youths to know their genotype status before entering into marriage contract to avoid the risk of sickle cell children.

He made this call during a rally he organized to sensitize the youths and other residents of Oshodi-Isolo on the effects sickle cell anemia on the society.

The advocacy walk against sickle cell in Oshodi was born out of high rate of patients living with the anemia in the society.

According to the lawmaker, he sponsored the awareness exercise as part of his contribution to humanity by reducing or even eradicating sickle cell in the society.

He informed that the approach he got from the executive Director of Genotype  Foundation, Mrs. Doris Gbemiloye, prompted his actions towards combating sickle cell as well as encouraging NGOs to embark on such programme to give children healthy life.

He concluded that youths should go for medical test on genotype before entering into marriage contract to avoid the risk of sickle cell children.

However, Doris addressed the sickle cell patients to take their medication daily, advising the female patients to see doctor before giving birth while urging those about to get married to go for test and do away with emotional feeling so as to make right decision.

She also offered advice on matching genotype, the ones that can be joined as spouse and the ones not to be joined.