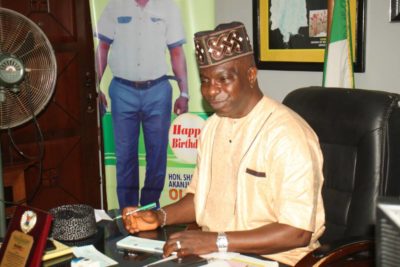 The Chairman of Isolo Local Council Development (LCDA), Hon. Shamsudeeen Abiodun Olaleye (Shammeh) has declared that, in continuation of his administration’s developmental projects, he would demolish and rebuild the Isolo Health Center to fit into the state-of-art facilities.

This, according to him, is besides the plan to build a new modern Health Center in Alagbeji community to widen the Isolo residents’ access to better primary health care service, saying the gesture is in fulfillment of his leadership passion to give back to the community as well as to make every part of the local government area enjoy the dividends of democracy.

Olaleye, who made his plan for the next one year in office known in an exclusive interview with Echonews, said that he felt the need for the upgrading of the primary health center to the status of general hospital so that the people of the grassroots could also enjoy the health facilities such as could be found in any general hospital across the state.

Apart from this, the LCDA boss disclosed that he has fashioned out a health scheme through which the pregnant women within the LCDA would be taken care of as all the registered pregnant women would soon be given maternal antenatal Kits– bags full of some medical materials.

Enumerating his achievements in the past one year of his administration, Shammeh noted that many have been done in the area of welfare for different categories of people irrespective of their tribe and political affiliation.

For instance, the LCDA helmsman informed that since his assumption of office one year ago, he has been taking care of the widows and the elderly ones as certain amount is earmarked for their welfare package on quarterly basis.

He also hinted that his administration, in its one year, has done a lot of reconstruction of road networks within Isolo, promising that he would continue improving on the infrastructure till a road at least is perfectly done in each ward in the LCDA.

He said, “If you look at the area of welfare, to God be the glory, around this axis, talk about Mushin, Oshodi-Isolo up to Egbe Idimu and the rest of that, we still remain the shining light when it comes to legislative-executive relationship and welfare. We stand tall to say that we are still the only local government around the area we have mentioned taking care of the councilors by way of providing them with official vehicles.

“We have participated in many state initiated health programmes; we have not been lagging behind. We have ensured continuity in the bursary award scheme and award for widows and the aged because we do it on quarterly basis and we have always responded to some challenges in the area of security around the local government.

DETAILS OF THE INTERVIEW LATER!