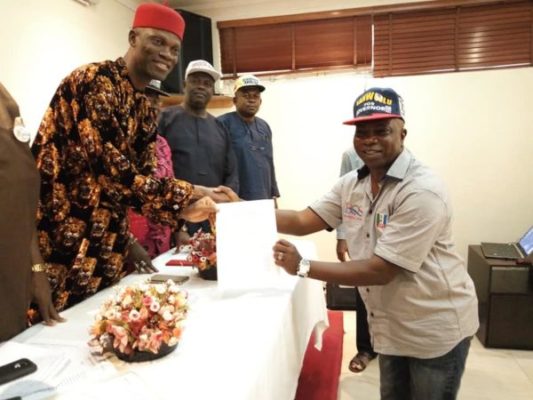 Olaleye, being ordained as the Director of Special Duties of the Independent Campaign Group (ICG)

The swearing in ceremony took place on 24th of November 2018 at Watercrest Hotel, Ikeja. Olaleye was among the newly inaugurated directors of directorates steering the campaign affairs of the APC governorship candidate, Babajide Olushola Sanwo-olu. as the director of special duties, he is expected to lead the 40-man directorate of special duties to mobilise support for Sanwo-olu through organised groups such as NURTW, NULGE, NLC, TUC and other groupings. The Director General of the Campaign Group, Mr. Tayo Ayinde, said Olaleye and other directors were carefully selected and were found suitable for their respective assignment. He added that the directors and their members have what it takes to succeed. Also inaugurated was the Commissioner for Home Affairs, Dr. Abdulhakeem Abdulateef as Director of Conflict Resolution. Alhaji Daud Suenu was also sworn-in as Director Religious Affairs.