In realization of the promise made by the Chairman, Isolo Local Council Development Area (LCDA) at the recently concluded endowment program for the aged, widow and physically challenged about imminent rehabilitation of Goloba street, reconstruction could be confirmed to have begun. 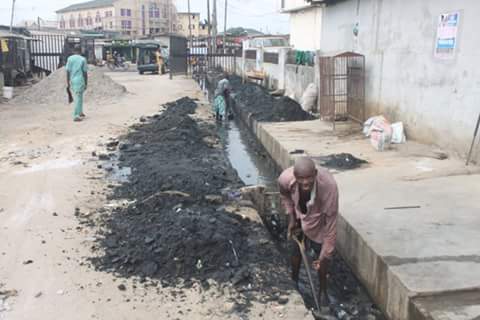 As expected, the reconstruction work on the street started with disseating of drainages on both sides as much as other rehabilitation exercise was noticed on the road to give the deplorable road a deserved facelift.

Although, the road has witnessed successive maintenance by previous council chairmen after being constructed three decades ago, it would be undergoing outright rehabilitation according to the Senior Special Adviser to the chairman on Works, Hon. Kayode Folorunsho.

Folorunsho further revealed that the road was deem fitted for complete rehabilitation not because the chairman’s age long family house is on the street but for the ideal strategic nature of serving as detour to Mushin Road in order to decongest traffic and also serve as link road; connecting Mushin Road to Akinbaiye.

According to him, Goloba street was first constructed about thirty years ago with successive council administrations doing their bits to offer palliative measures to maintain the road, maintaining that this would be the first time a council administration would totally rehabilitate the road.

“Before we started the construction work, we have installed street lights to beef up security in the area. We are not doing this because the council chairman’s family house is on the street but because of the strategic nature of the street; it connects Mushin Road with Akinbaiye street thereby helping to decongest traffic on Mushin Road.”

He went further to disclose that more roads in other wards have been earmarked for renovation, stressing that the chairman was firm on the course of achieving each of his campaign promises before the end of his tenure.

He added, “More roads have been listed for repair in other wards of the community and as soon funds are available we shall move to site. This is an electoral promise which Hon. Olaleye’s administration is committed to keep.”

It is expected that the duration of works on the street would last for two weeks. In the meantime all vehicles and other wheeled means of transportation were implored to ply alternative routes.