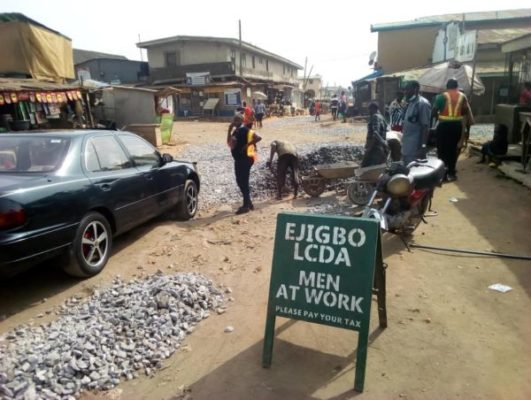 As rehabilitation work started on Adekoroye Olarewaju Street off Kayode Street, Double Power Line area of Ejigbo, last week, the residents, shop owners and motorists in the area were full of praise and excited, commending the Chairman of Ejigbo Local Council Development Area (LCDA), Hon. Monsuru Bello Obe for extending the hand of good governance to their community.

The road, which links Power Line and Ona Iwa-Mimi Street to Ori-Oke bus stop, has been in a dilapidated state as road users find it difficult to pass through it before the local government’s approval for its rehabilitation.

Expressing his happiness, Pastor Orimolade, a resident of the area said: “It is good government that repairs road for its people and I want to appreciate the effort of our chairman, Obe for the good things he is doing. I feel good about this and I am happy for the people doing it from the workers to the chairman.”

Mrs. Sydney, a shop owner in the area said she was surprised when she earlier saw the materials being delivered on the street, thinking it would be like past experiences when materials were sometimes brought to the street and nothing was done.

She was of the opinion that if the road could be completed, it would be very good for all as there would be no more erosion and dust on the street.

The Chief Press Secretary (CPS) to the council chairman, Mr. Muyideen Akinsanmi Akinyemi told Echonews that the rehabilitation of Adekoroye/Olarewaju Street was part of campaign promise of the chairman and that it was done in a bid to stabilize the road and ease the tension on the major road.

He further explained that the road had been in bad state and the chairman saw the need to stabilize it now, adding that though there has been pressure from some so called Omo-adugbo to get the road repaired.

He however said the road will be ready within two weeks.

One of the works on the road identified lack of maintenance of drainage by the residents as a major problem as many items were being dumped in the drainage, blocking the free flow of water.