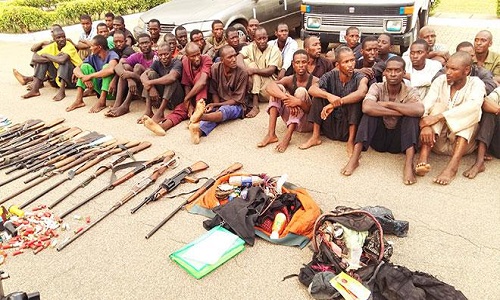 The residents of Ejigbo have called on the government to increase security in the community to curb the increasing rate of crime particular robbery activities as new groups of robbers have been noticed to be in operation specifically around Ilufunmi Amida and Caroline areas of Ejigbo.

The groups were said to have been going round with motorbikes, snatching phones from unsuspecting people and also wounding them with cutlass.

Narrating his experience with the robbers, Mr. Rafiu Akinola of 14/16 Idimu road, Ejigbo said on Tuesday June 18, on his way to the last bus stop to board a bus to Oshodi to his work at Lekki, he was stopped at about 4:30am along the Idimu road by three guys on a bike who asked for his phone.

He said after handing it over to them, they still butchered him on his head and ran away, saying he had to run to a nearby hospital for treatment as blood was gushing out of his head.

He said: “At around 4:30am on my way to the bus stop, when I got to the mosque before Ilufunmi Street, three guys on a bike stopped me and asked for my phone. I gave them everything and they collected it from me. Two of them were with cutlass at the back and one of them cut me with the cutlass on my head as they ran away.

“There was no one to help, so I held my head as the blood was gushing out and I ran to the hospital. The doctor told me after the treatment that the cutting was too deep and it would require an x-ray to ascertain the effect on me. But right now I’m getting better.

The Doctor treating him at the Medibam Medical Centres at Jubril Olabisi, Ejigbo, Dr. Abisola Afuye told our correspondent that the cut part of the skull was fractured and that the victim had lost lot of blood, making his blood vessel to be blocked.

She explained that though the cut was so deep, it didn’t get to his brain, and that in the course of time an x-ray would be carried out on his skull to ascertain the impact.

She confirmed that he has been responding to the treatment, saying he would be discharged when his health was ascertained.

ECHONEWS also learnt that the same group of guys had earlier in the previous night to this incident, at around 11:30pm also attacked a man identified as Mr. Oba, a guard at the popular Blue Arena night club along Idimu road, on his way home after closing from work.

It was said that Oba was stopped at Military Zone where the gang asked for his phone which he resisted to surrender to them, and they matcheted him severely and subsequently ran away with the phone.

He was said to have also been treated in the same hospital and discharged at the time of filing this story.