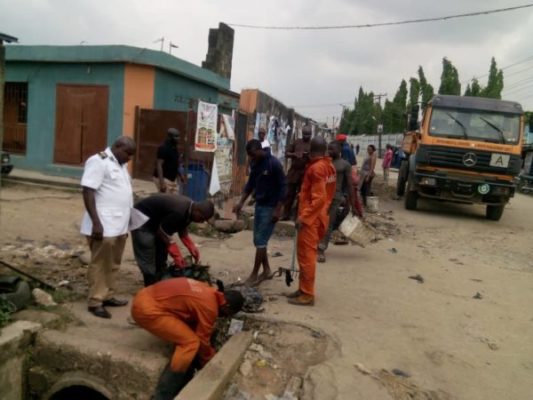 Faced with floods flowing at the onset of rains, some communities have been in sorrow caused by damages to properties in many homes.

One of such areas is Aberuagba street off Agisegiri road in Oshodi which experienced uncontrollable flood last week.

However, the community has shown appreciation to the Local Government for coming to their aid promptly by de-flooding the community.

Following the investigation of the flood, it was discovered that the cause of the water spillage was wrong method of refuse disposal especially plastics and other disposable items which resulted into blocking water passage, thereby leaving the flow with no choice but to spill out onto the streets.

The situation was addressed by the Head of Department (HOD), Environment, Mr. Akeem Adeoye, who supervised his team in the exercise of refuse evacuation from the drainage to allow free passage of water and avoid water spillage onto the streets.

Adeoye however appealed to the residents to desist from blocking drainages with refuse that could impede the free flow of water, urging them to educate their children on proper refuse disposal methods.

He said the refuse must be neatly packed and arranged in cellophane bags for easy collection by the refuse agents.

The residents of the affected street promised to adhere to proper refuse disposal as well as train their wards.