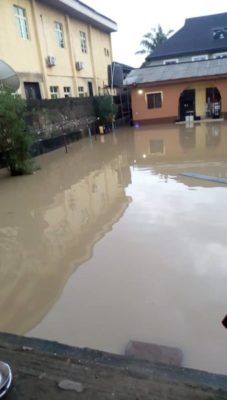 The residents of John Kayode Obafemi Street at Bucknor, Ejigbo have appealed to the state government to help open up the blocked drainage in the street which has been making life difficult for them, causing the entire houses to be submerged at a little drop of rain.

Explaining the plight of the residents, the Taskforce Chairman, Bucknor CDA, Asiwaju Kayode Obafemi, said the street is under intense pressure whenever it rains as the gutter in the street linking the main drain on the Bucknor main road has been blocked by the concrete used in the construction of the main road curvet.

He explained that the situation is beyond the capacity of local government which has once put palliative measure due to the length of the street.

He noted that situation was worsened by some residents who deliberately blocked the drain in front of their houses.

He said that they were fined N20,000 by the local government which instructed them to break the blockage.

He however said people refused to break the concrete even after paying the fine.

“We are appealing to our governor, Babajide Sanwo-Olu to come to our aid, the children cannot go to school. Whenever it rains no one will be able to come in or go out as everywhere will be flooded whereby some people now have pipes to pump out water from their houses. No one can access the street when it rains and it is making life difficult for us.

Meanwhile, the Environmental Health Assistant Director, Ejigbo LCDA, Mr. Mojeed Adenuga, when contacted on the issue, said the street would still be revisited to see how the people have responded to the instruction to break the brick blocking the drainage.

The CDA Chairman, Hon. Gbolahan Oyin said they have been working to re-channel the drainage of the street, adding that some contractors have come to survey but the fund to execute was not available, saying they might approach the local government for help.