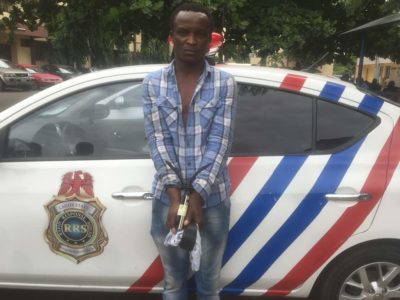 A pick pocket suspect, Femi Solomon arrested by Operatives of Rapid Response Squad (RRS) of Lagos State Police Command, has confessed to having stolen over 1,200 different kinds of phones from commuters since he joined his gangs.

The pick pocket route started from Oshodi to Mile 2, extended to Ajegunle, Iyana Oworo, Ketu and Ojota, until his arrest at Iyana Oworo area last Thursday after stealing a Samsung phone from a commuter at the bus stop.

The suspect, an auto technician confessed that he joined the gang in Obalende where he sought prospective customers to buy fairly used clothes, popularly called Okirika.

According to him, one of his customers, lsmaila who was about 50 years old introduced him to pickpocketing.

“I noticed he was coming to Obalende finely dressed with so much money. I told him I was looking for better job opportunity and he assured me that he was going to assist me with one. He asked me to be following him while I learned from him.

“I was following from behind and monitoring his actions, we were moving from one bus stop to another from morning till evening. He was stealing phones and wallets from passengers inside bus and at bus stops.

“Throughout the six months I followed him, we could pick six to eight phones and wallets from people without them knowing. He kept everything to himself but at the end of the day, he would give me between N4,000 and N6,000 depending on his whims.

“On August 2016, l started my own, I wasn’t bold enough to pick pocket during the day, besides, I was still a green horn, so I decided to go out from evening since nobody pickpocket at night.

“I started operation at 6pm and end at 9pm, my target is between four to five mobile phones a day. Once am able to hit that figure, I stop operation and retire. I sell phones to friend based in Lagos Island.

“In my rough estimation, I would have stolen 1,200 phones at bus stops and inside commercial buses.

“The routes I normally go are Oshodi, Mile 2, Ajegunle, Iyana Oworo to Ketu and Ojota. I operate on Mondays, Tuesdays, Fridays and Saturdays. Even at night parties and overnight events, he stated.”

Recovered from the suspect were four mobile phones. He has been transferred to the state criminal investigation department (SCID) for further investigations.