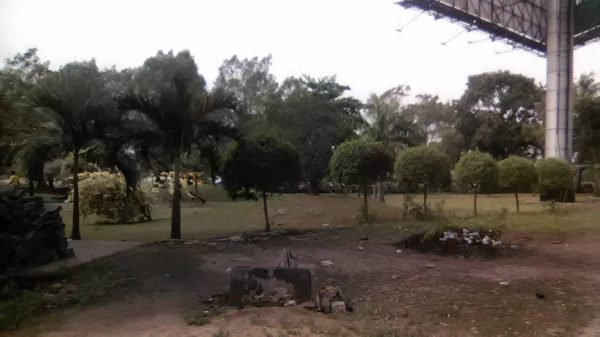 The residents of Charity, Oshodi, have been subjected to unnecessary fear as miscreants have taken over the abandoned Apakun Garden Parks as their hideout after committing all sorts of nefarious activities in the community.

They appealed to the concerned government authorities to revamp the garden in order to tame the rape and robbery cases which are always recorded along the expressway adjacent to the garden.

Two weeks ago, it was reported that an 18-year old girl was raped by five guys along the DHL bridge at about 9pm.

This case has awakened the consciousness of the youths and community leaders to address the menace which has posed as a distress to the community.

Ismail Agbalaya, a resident living at Aimasiko street, who witnessed event, gave account of how he and some other boys provided clothe to cover the girl raped and left completely unclothed by the five-guy gang.

He narrated: “I and some other boys were outside relaxing at about 8pm. Suddenly, we heard the shout of help from the garden side, we rushed there and saw a girl naked and crying, saying that five guys have just raped her. One of the boys quickly offered her his singlet, while another rushed to get a wrapper for her.

“We checked around the area but couldn’t find anyone around except underwear and clothes which belonged to the victim who was on her way home to Ijesha from church. We placed a call through to inform the victim’s mother about the incident and appreciated our assistance.”

The gardener in charge of Apakun garden, Ugochukwu Marvin, also testified to the rape incident but declined that none of such actions happened within the garden except alongside the streets and bridge.

He said though he leaves the garden latest 7:30pm daily and might not be aware of what happens thereafter.

Marvin solicited urgent intervention of the government to provide all-round security to guard the place in addition to electricity that would power lights round the garden at night hours to stop shady actions of hoodlum around the vicinity.