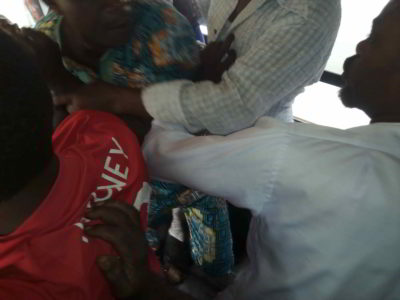 The warring passengers inside the BRT

A war-like situation broke out inside a red long commercial bus, Bus rapid transit otherwise popularly known as BRT today along Sango-Oshodi route as passengers complained inconvenience due to overloading by the bus operators.

It started with grudges when a passenger who was sitting closing to the front door of the bus started complaining of inconvenience caused by the overcrowded standing passengers. 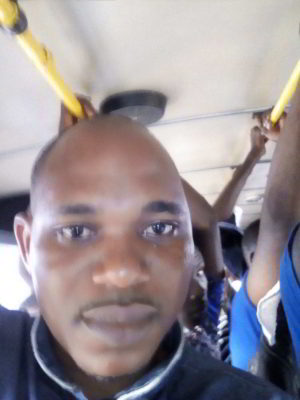 The concern passenger was shouting on the driver and the female bus ‘ticketer.’

This generated into severe argument with another passenger defending the driver and the conductor while others were against them.

As the argument continued en route Oshodi, the angry affected sitting passenger suddenly engaged in fighting with the other passenger standing, who was defending the driver.

The conductor declared that they needed to overload the bus in other to meet their daily delivery targets.

She also stated that she had to pay the agberos about N1500 per trip. 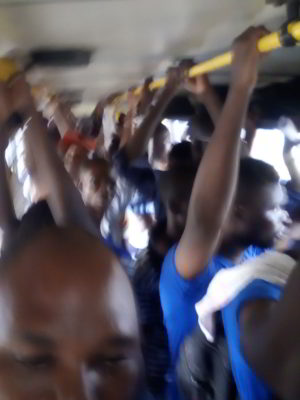 While the passengers on transit kept complaining that the bus such as the ones under organized control should not be overloaded, saying there should be limit to the number of passengers to carry at a go.

According to them, this is the reason the busses no longer issue tickets to the passenger.

Meanwhile, the conductor voiced out that the bus was no more BRT as it was earlier known but a public bus popularly called Molue in Lagos city.

It was rumoured that each of the operating bus deliver about N70000 on daily basis.

However, the some people believe that the busses are normally overloaded for the personal gains of the drivers and their conductors.

Since the Lagos state government has ceased to be partner with the private owners of those busses, the services of the busses have not been enjoyable by the passengers.

Before, while the busses were under the control of government, the passengers were issued ticket at the point of boarding, this normally accounted for the amount of money generated by each bus through the number of ticket sold.

However, without the use of tickets, the services of the busses have degenerated as the conducts inflate the fares at will coupled with incessant overloading.

Meanwhile, the regular passengers along Sango-Oshodi route therefore appealed to the Lagos State Government to hasten the new BRT lane embarked upon to ease the their daily stress on the road.