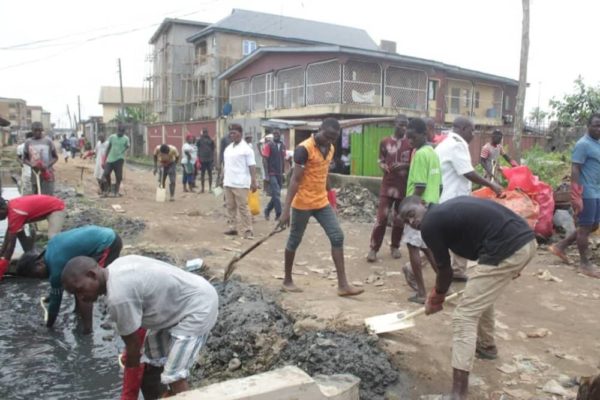 Following the accusation of negligence made against the government of Oshodi-Isolo Local Government by the residents of Mafoluku especially on the deplorable condition of some roads and filth on some streets reported by Echonews last week, the management of the Council has embarked on road maintenance and evacuation of drains in some axes within the local government area especially Old Ewu road which was hitherto a flood prone area in Oshodi.

A top geared effort from the state and local government authority commenced to fix the deplorable condition of Old Ewu road being the longest and popular street.

Echonews gathered that the recent flood that engulfed the entire axis of the street was as a result of ongoing heavy construction work on Airport road that necessitated the contractor’s need to tentatively interrupt all the water channels along the area in order to carry out construction activities.

Consequently, the normal flow of water from Old Ewu to the connected canals within the streets was affected including other streets such as Ajisegri, Oyegunwa, and Wahab Larinde.

Oshodi local government mobilized staff from environmental department to commence massive evacuation of waste from all waterways in the area to facilitate free flow of stagnant water.

All the affected residents were enjoined by the local government to cooperate with them by desisting from the wrong disposal of waste and uphold regular cleaning of their waterways.