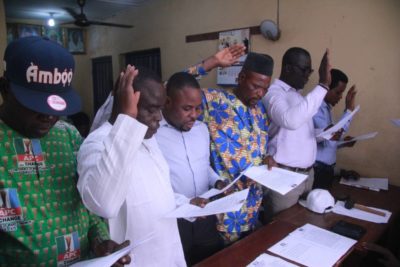 The officers were charged with the responsibility to run the affairs of the party at the LGA.

He also directed the ward chairmen to administer oath of office and allegiance to the party elected officers at the ward level.

The assistant legal officer of the party, Akorede Shoremilekun, administered oath of office and allegiance to the elected officers, which was followed by the swearing in of the ward chairmen.

Immediately after the inauguration, all the wards chairmen in Oshodi-Isolo LGA conducted election among one another, supervised by Mafoluku ward chairman, Alhaji Kadiri shittu to pick there over all chairman and the mantle fell on Shogunle ward chairman, Samuel Ayeni who emerged as the chairman of all the wards.

Ayeni thanked his colleagues for the honour bestowed on him and promised to work in collaboration with all other chairmen to take the party to a greater height.

Admonishing the elected ward chairmen, the Oshodi-Isolo APC chairman, Alhaji Kasali, who conducted the ceremony, congratulated them while reminding them of their responsibility to the party.