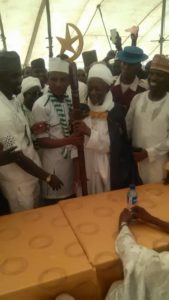 The mosque had been under the acting leadership of Alhaji lmam sulaimon Soliu, the Chief Tafsir of Oshodi Central mosque since 29th of February, 2008 till 29th of may 2015 when the new chief imam was appointed to carry on the Islamic duties of the mosque.

In his lecture, given at the turban ceremony held at Ewanla primary school, Oshodi, the Mudeer, Morcas Agege Lagos, Fadilat Sheikh Abeebullah Abdullah Al-llory, described the duties of Chief lmam and the other title chiefs as great responsibility saddled on their shoulders, saying the leadership entailed physical and spiritual teachings of Islamic doctrine in words, deeds and actions that would draw people to the kingdom of Allah.

He also urged members to support them, not to judge their deeds but allow  Allah who has called them to judge. 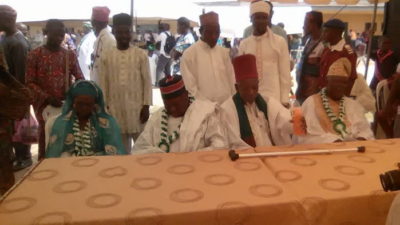 During the turbaning exercise, the Grand khalifat of Qadiriyya in Yoruba land, Ghana and Benin republic, Khalifah Sheikh AbdulLateef Shugaba Salaty, presented the new chief imam with the staff of office which signifies authority to any mosque in Lagos state.

He added that any mosque that opposes his counsel shall be closed down. Khalifah reminded the council  committee that they were under the control of the chief lmam but not otherwise.

Certificate was presented to the chief imam for clarified recognition as Islamic leader in Lagos state.