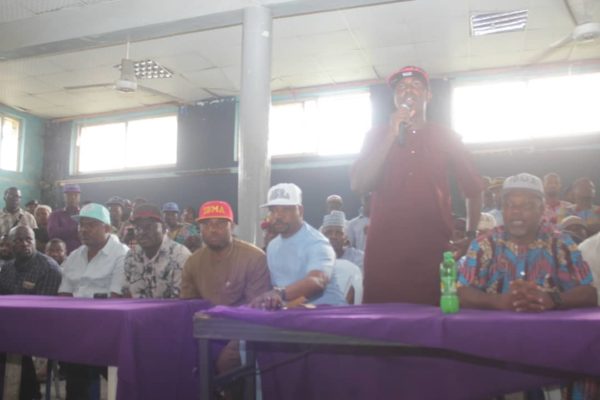 The National Union of Road Transport Workers (NURTW) Treasurer, Lagos State chapter, Alhaji Musiliu Ayinde Akinsanya (MC Oluomo) and the Executive Chairman of Oshodi-Isolo Local Government Area, Hon. Idris Bolaji Muse Ariyoh, have laid the cold war between them to rest, as the duo promised to work together for the progress of the party in Oshodi.

During the reconciliation, which was anchored by Samson Agbetoye (Golden) at Oshodi Sports Hall (White House), the two personalities urged their supporters to forget the past and face the reality of the present and think of the future.

The reconciliation forum was interactive with an opportunity for members of the group to express their grievances and also proffered suggestions for way forward.

In his address, Oluomo admitted that there are times of misunderstanding in good relationship but the ability to forgive one another paves way for happiness which is essential for true love to exist.

He said, “Today, i am very happy to welcome our chairman and friend to the meeting of Oshodi oneness and also to make public our genuine reconciliation as brothers from same household. We will remain committed to the same party and leader.”

He also used the medium to declare his stand on the political structure of the All Progressive Party (APC) especially in Oshodi.

He said, “I once said that when time comes I would tell where I belong politically. Today, I hereby support Hon. Ariyoh and also urge you all to support his aspiration.”

Responding, Ariyoh appreciated Oluomo for his understanding as he took note of his advice with a promise to apply it to make their friendship great.

He stated, “We have forgiven each other in areas we have erred as no one is perfect. Let us work together to ensure victory for the team and party.”

Members of the forum advised that leaders should always intervene whenever misunderstanding comes up, never to allow it to linger for long.

They also pledged their support to Ariyoh’s aspiration for the House of Representatives in 2019.