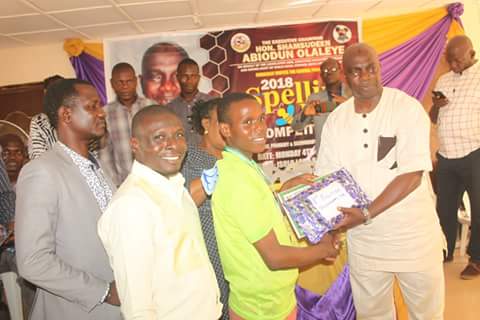 The chairman, Isolo Local Council Development Area (LCDA), Hon. Shamsudeen Abiodun Olaleye has promised to provide more infrastructures for the students in addition to a 100-seater school bus, customized school bags and exercise books already procured, saying he was strategizing an all-encompassing approach towards educational development in the council area.

In his address to pupils and students of selected public schools during the 18th edition of the Spelling Bee competition organized and held at the council secretariat, Olaleye stated that education is a major programme of his administration; hence he has mapped out a pragmatic approach towards ensuring that public primary and secondary schools in the council area compete favourably with their private counterparts. 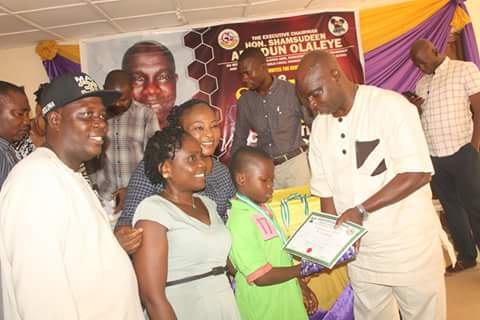 The council boss, who paid glowing tributes to Sen Oluremi Tinubu, the initiator of the annual competition among public primary and secondary schools in Lagos State, noted that the competition, aside from helping students to improve on their vocabulary, also helps them to study hard in their educational pursuit.

According to him, his administration is on the threshold of returning public schools to its glorious past through interventions that would encourage pupils and students have equal opportunities with students in private schools. 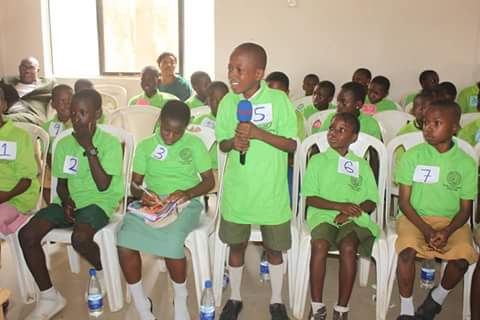 To ensure this, the council boss disclosed that the council has taken delivery of a 100-seater school bus that would convey students to and from the School Village.

“We have developed a holistic approach to develop education because it is the most important programme of this administration.

“We have recently bought a 100-seater school bus that would take students to school. In the next two weeks, we’re going to make delivery of another one and hopefully we would buy the third one before the commencement of next academic session. In all, we have earmarked three buses to ease the movement of our students to and from their schools.

‘We have since noticed the stress and risk they undertake daily while going to school. The buses would pick students from Ilasamaja, Ajao Estate and Okota in the mornings and return them in the afternoon. This would allow the students to concentrate fully on their studies,” he said.

This is just a tip of the ice-berg as Hon. Olaleye also informed that his administration would soon commence the distribution of customized school bags and exercise books for primary school pupils in the council area.

Aside this, he added that plans are also in the pipeline to equip primary school pupils with at least a pair of school uniform next term.

“This is our token contribution to their education and we are motivated to do this because we want to unburden their parents many of whom are economically deprived. As a responsible government, we want to give a helping hand in this regard. It is our belief that as we are doing these interventions, it would help to encourage more parents to enroll their wards in public schools.

“I am a product of public school and I am proud of what I have achieved today and that is why we have taken it upon ourselves to return our public schools to their good old days,” he said.

To show appreciation for his administration’s effort, Olaleye enjoined the students to show seriousness in their studies to become a pride to their parents and communities. He also advised them to shun drugs and cultism, stressing that such despicable acts do not only destroy dreams but also their lives.

In her goodwill message, the First Lady of the council, Alhaja Ronke Olaleye, who was ably represented by the Supervisor for Education, Hon. Buhari Bello, enjoined the winners to be good ambassadors of the council area at the state level of the competition expected to hold later this year.

“It is high time we brought back the trophy to our LCDA and one of you should win again to become the ‘One-Day Governor’ for the year 2018. You can do it and I believe in you, so believe in yourself, you deserve it for all your effort,” the First Lady advised.