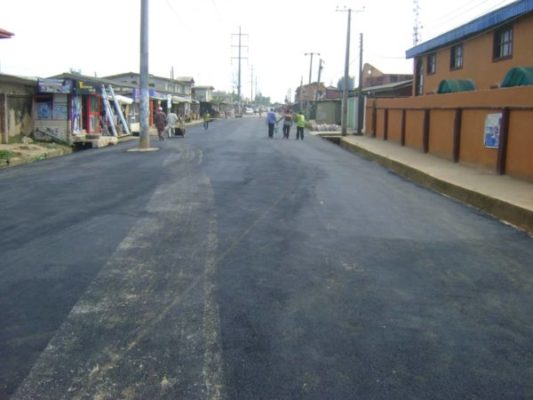 It had been observed that the 945m long and 10.8m wide road had potholes, and that the road got flooded whenever it rained.

The situation had made it difficult for commuters to pass the road which links Egbe-Ejigbo and Ailegun Roads.

In a statement issued by the Head, Public Affairs Unit, Ejigbo LCDA, Kunle Oladele, the rehabilitation and reconstruction work on the road included draining of the flood, excavation of asphalt, spreading of laterite, grading, rolling, stone basing, and pouring of asphalt.

According to him, a 78m long drainage, located beside Ronik Polytechnic, Ejigbo, was also evacuated while the retaining wall was reconstructed, adding that the project, which was initially planned to last for eight weeks, was eventually completed in three weeks.

The statement read: “Since his assumption of office in July 2017, Obe has taken full force on infrastructural development in the Council. To him, ‘The pressure and the need for community development and GDP growth makes it important for the roads to be continuously rehabilitated, hence, the interest in infrastructure’. There is so much pressure on Ejigbo roads, because most of the commuters going to Ikeja, Mainland and Island pass through them.

“The first road rehabilitation project which the present local council embarked upon was that of Moshalashi road in Ejigbo, and ever since, the work has continued non-stop.”

Meanwhile, the council boss appealed to the good people of Ejigbo to play their part in infrastructural development by disposing their refuse directly to the PSP Operators.

He stressed that when refuse is dumped by the road side or in drainages, it ends up blocking the passage of water, leading to flood whenever it rains.

The council chairman followed up the plea with a strict warning that ‘Whoever is caught messing up the environment will be severely sanctioned’.

He advised the residents of Ejigbo to ‘ensure a neat environment, so that more money would not be spent curing avoidable diseases’.

Obe has recently been awarded ‘The Best Chairman Infrastructural Development in Nigeria’ by the Centre for Democratic Governance in Africa (CDGA).

This adds to the over-50 awards received by him in less than two years which he has spent in office.