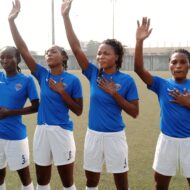 In what was supposed to be a great contest between FC Robo Queens and Delta Queens, it was robbed away by the biased nature of the center referee, Aliu Aminat and her assistants Williams Veronica and Oladoja Olawunmi who all chose to be abysmal with their decisions in the match played at Legacy pitch, national stadium, Surulere, Lagos.

The match wasn’t an exciting one as the center referee Aliu Aminat and her assistant referees Williams Veronica and Oladoja Olawunmi were biased and officiated in support of the away team, Delta Queens.

FC Robo Queens dominated proceedings of the game but were unlucky to get a goal in the encounter as the bad officiating crippled their play.

Rukayat Shobowale was highly impressive as she played on the flank for FC Robo Queens, she tormented the backline defense of Delta Queens numerous times before she was substituted for Opeyemi Ajakaiye in the second half.

Delta Queens was able to get just a shot on target in the entire game as they depended on the sweet romance they have with the referee to frustrate FC Robo Queens in the match.

The center referee Aliu Aminat was very abysmal and biased in the officiating of the match as she favored the away team (Delta Queens) for the duration of the game in order to make sure FC Robo Queens lost the game.

Opeyemi Ajakaiye came close to score at the late minutes of the game but was just unlucky to find the back of the net.

Speaking with ECHONEWS, the coach of FC Robo Queens said the team played well but the goal didn’t just come but he will work on the team’s lapses and improve it in subsequent matches.