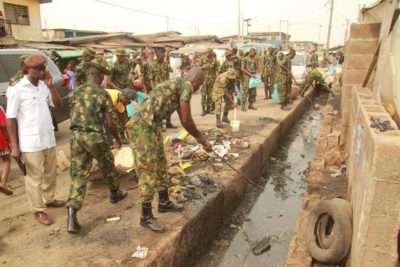 In an attempt to strengthen the civilian-military relationship, men of uniform at the Airforce Base Ikeja have engaged themselves in community activities such as environmental cleaning in Oshodi community.

The military men, led by the Commandant of Sam Ethan Airforce Base, Olatunji, were received by the Vice Chairman, Oshodi-Isolo Local Government, Daisi Oso, who represented the Chairman, Hon. Bolaji Muse Ariyoh and other members of the executive cabinet.

The over 150 men in uniform including women were divided into three groups with assignments and locations to cover such as Oja Oke, Ajibulu and Oba Elewu road for sanitation work.

Homage was paid to the Elewu of Ewuland, Oba Shakirudeeen Kuti to brief him of the mission embarked on. 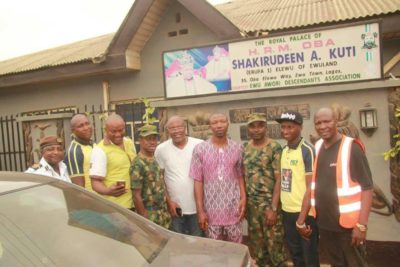 During the exercise that lasted over four hours at the three locations, members of the residence joined the military men to clean, clear drainages and evacuate rumbles.

The residents appreciated the peaceful co-existence with the military men by offering them with refreshment.

The vice chairman, Oso thanked them for their selfless service not only in defending the nation but also assisting to make the environment clean and save from diseases such as malaria, cholera and others. 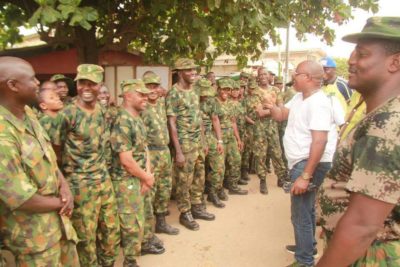 Speaking further, he said that Hon. Ariyoh’s administration would be ready to partner with groups or individuals with programme or service that would bring development to the community.

He also anticipated a friendly football match that is proposed to come up soon between the men of the Airforce and Oshodi community.

He however appealed to the residents to always ensure that they maintained clean environment.