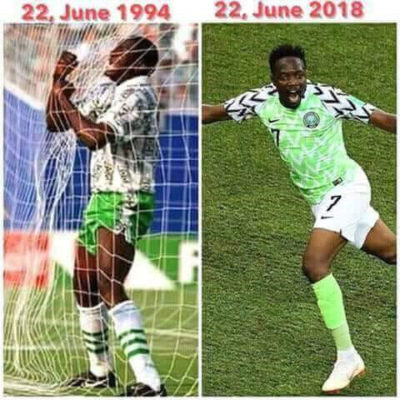 Many Nigerian football lovers had gone to social media to raise negative comments and register their anger against the Super Eagle’s performance at the on-going world Cup in Russia as their first match saw them lost 2-0 against Croatia.

However, the result of yesterday’s match against Iceland has raised their hopes that the team can make it to the final as football fans believe that the Super Eagles have improved on their performance.

Echonews sampled football lover’s opinions on the performance and fate of the Super Eagles in the on-going World Cup competition. Exerpts:

The new formation the coach introduced has helped – Niyi

I commend the new formation the coach introduced this time, with starting Ahmed Musa upfront. If we continue with this formation, we should be able to beat Argentina. Odion Ighalo should be paired with Ahmed Musa against Argentina. With the ‘wonder kid’ Eheanachor, I insist things should be left the way it is for subsequent encounters. I also wish Ajilore was in the team. For John Mikel Obi, I think the former Chelsea man has not proved his worth; Ogei Onazi should be a better option in the midfield.

Mr. Sunkanmi is a fan of John Mikel Obi. He said: Come rain, come shine, Mikel should be left in every line up being the captain of the team, who has a great leadership skill. His presence on the field motivates the team.

Let me commend the effort of the coach for improved performance by changing tactics this time. So many jobs have been done in the midfield. They are more coordinated and quicker this time to give support to the strikers. I wish them all the best in the competition.

An improvement is the Iceland match, with a 3-man defence – Rasheed

As a soccer enthusiast, Rasheed Abiodun of Echonews also shared his view on the two matches so far. He analyzed the Croatia match had 4-2-3-1 formation leaving Odion Ighalo as lone striker upfront.

An improvement is the Iceland match, with a 3-man defence. This resulted to leaving out Abdulahi Shehu from the squad in a 3-5-2 formation. This was what accommodated the duo of Kelechi and Ahmed Musa as strikers. The coach has done really well by retaining the formation which he earlier introduced in the second half in the match against Croatia.  There may be a need to switch back to four men at the back against Argentina as Lionel Messi who has been a great disappoint so far can do the unexpected. The work depends more on the midfielders whose jobs are to stop opponents. I predict Supper Eagles get to quarter final.