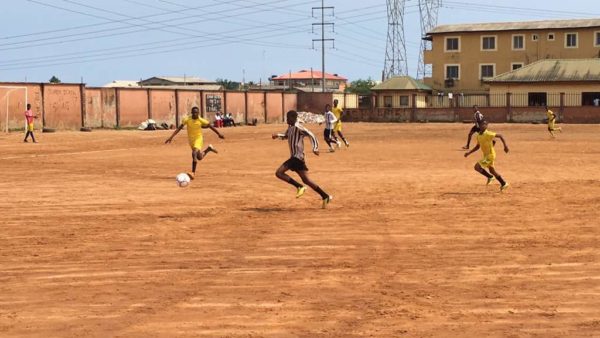 A Non-Governmental Organization (NGO), Migrant Project, has engaged the youths in Ejigbo in series of friendly football matches as part of sensitization on illegal migration by Nigerian youths while raising awareness on viable alternatives.

The friendly matches, which featured exceptional play-off matches among six teams at the Ejigbo Mini-stadium, was convened by the NGO with major interest in proper migration sensitization.

The NGO stated that it felt concerned with the reports that over 1,000 people drowned in the Mediterranean Sea in the first six months of the year while hundreds of thousands have been reported dead in the desert with many others experiencing grave inhuman treatments in Libya in their struggle to travel to European countries through irregular routes.

The Migrant Project Media Officer, Tayo Elegbede, declared that the NGO is aware of the unpalatable experiences by the youths in the country, disclosing that the organization is set to tackle the issue with the use of sports and other variables.

“The Migrant Project is a behavioural change campaign, which aims to fill existing information gaps and enable Nigerians make informed decisions knowing that irregular migration is never a good option,” he hinted.

According to the organisers, the football event was aimed at diffusing the messages on the hazards and realities of illegal migration to youths at the grassroots and telling the youths on how it can hamper their life goals, in the spirit of the ongoing 2018 FIFA World Cup, as said by Olusoji Ajao, the Team Leader, Local Migration Experts for The Migrant Project, Lagos.

Ajao said that the event was part of the organization’s robust community outreach programmes which, according to him, would be taken to other locations in Lagos for several matches for both male and female football players and lovers.

According to the facility manager of the Ejigbo mini-stadium, Gbenga Popoola, the matches and awareness campaign were timely interventions to enlighten several youths who have been a victim or intend to embark on illegal migration on the dangers of such act.

The Football event kicked off with a contest between two junior teams – the Golden Star FC and the Diamond FC. The match ended in 2 – 0 in favour of Diamond FC.

In other fixture, which involved the senior category featured a fiercely contested matches between Success FC and the Golden Star FC. The match ended goalless and resulted in a penalty shootout which was won by Success FC.