A non-governmental organization (NGO), LoveGate Universal Care Foundation (LGUCF) that cares for the widows and widowers, has beckoned to the governments at the federal, state and local levels to support its effort geared towards building school and health center for the vulnerable people especially the widows and widowers at the grassroots.

Already, the NGO stated that it has acquired about nine plots of land at Ijedodo area of Lagos state, looking forward to financial support from the governments and other wealthy individuals in the building of school and health center on the land.

Speaking on Tuesday at the monthly meeting held at Ijedodo Youth Centre, Ijedodo, February edition, where the widows and widowers were normally given food stuffs and other supporting materials, the founder of the foundation, Tina Chinedu, told Echonews that since she started the foundation three years ago, she has been giving helps in forms of food stuffs, clothing and money to the widows and widowers across Lagos state without any support from neither the governments nor any other person in the society.

Chinedu, who was represented at the February meeting by the Coordinator of the foundation, Tajudeen Noah Ododo, declared that she could not do it all alone, saying the beneficiaries deserved more than what they normally received at the end of months.

She disclosed that the NGO spent not less than N300000 to cater for the monthly needs if the widows and widowers.

“Since we started three years ago, I have been all alone giving those people rice, food ingredients, clothes and money every month end.

“Despite the fact that I don’t stay in Nigeria, I make sure I’m present here and if I’m not, I would send about N300,000 every month to cater for the monthly needs of the members of the foundation.

“These people need more such aid as school for their children and health centre. We have already acquired land to do that but we need support from governments and other philanthropists in the society.”

She enumerated other projects the foundation has embarked upon to include training and empowerment for the windows to start businesses or handiwork to stand on their own.

Corroborating her claim, the father of the founder, Alhaji Saheed Shittu, reiterated that Chinedu has been struggling to make the widows happy and keep them alive despite the fact that she did not get money from other sources than her own small business.

According to him, it is through NGOs such as  LoveGate Universal Care Foundation that the governments could get to the grassroots.

Meanwhile, the widows and widowers, who have been benefiting from the foundation about three years of its establishment, lauded the founder for her ceaseless effort at rescuing them through her commitment.

According to them, Chinedu has been the God-sent ‘Angel’ to give them hope and keep them alive. They disclosed that she had helped them beyond giving them foods.

They testified to the supports she has been giving in terms of health, paying other children’s school fees, paying their rents and other related life-supports.

They said they always targeted month end to collect their stuffs from the founder and that she has never for once disappointed them.

However, they equally appealed to the governments to come to their aid as the foundation alone could not be left to the responsibility supposed to be shared by the governments. 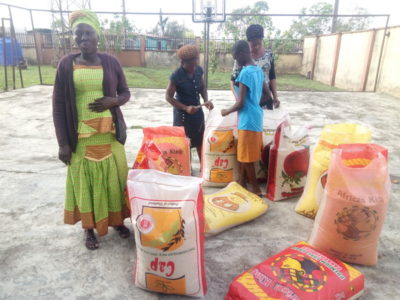 They particularly called on the governments to provide jobs for their children who are graduates, saying if they are gainfully employed, they would be able to support the foundation and that that would reduce their dependence on the foundation.

They specifically called on the Lagos state government to help them reconstruct Ijedodo road as many of them come from all other areas across the state to take their stuffs at the community.

They claimed that the road was in very bad shape for them them to ply.

They also sought governments’ support in the projects embarked upon by the foundation as it would be a great benefit for the vulnerable people at the grassroots.

It was learnt that the foundation currently care for about 300 widows and widowers across all local government areas in Lagos state, still looking forward bro take more of them.