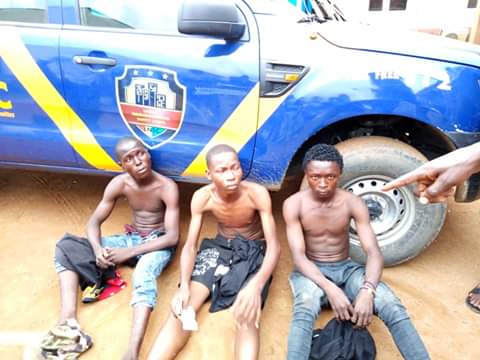 A team of Lagos Neighbourhood Security Corps (LNSC) has apprehended three suspected hoodlums who specialize in dispossessing students of their possessions at the School Village in Okota area of Lagos State.

The hoodlums were rounded up following a distress call from the Principal of Central High School, who reported the incessant siege by the hoodlums on unsuspecting students after school hours.

The principal was said to have alerted the Commander of LNSC Isolo LCDA, Funmilola Adekile, about the incessant raid on students by hoodlums who brandished dangerous weapons such as knives, daggers and cutlass to scare the students before whisking away with their possessions.

However, the neighbourhood watchers stormed the School Village about 2.45pm on Wednesday and spotted the suspects who immediately took to their heels on sighting the team.

They were immediately given a hot chase which eventually resulted in their arrest.

The suspects are Oluwaseun Samson (20), Emmanuel Ugochukwu (20) and Ibrahim Balogun (20).

They were paraded before the Secretary to the Local Government, Hon. Emmanuel Olojede, who immediately directed the commander of LNSC to transfer the suspects to Okota Police Station for further investigation.

Meanwhile, the suspects denied nursing plan to attack the students even as they could not offer cogent reason for their presence at the School Village before their arrest.

Their arrest came barely a day after a female student was reportedly stabbed by hoodlums who invaded the School Village, dispossessing of her of her phone and money.

Speaking on the arrest, the SLG said the Peace and Security Committee of the LCDA is increasingly disturbed by the ugly development and have since commenced a counter-plan by the security agencies to combat the rampaging hoodlums.

He informed that the police have been detailed to maintain patrol of the School Village before, during and after school hours with a view to providing security for the large population of pupils and students at the village.

“We have asked the police to conduct a diligent investigation into the matter with a view to further apprehending more hoodlums terrorizing the School Village. We place high premium on security of lives and properties within the council area particularly at the School Village and we will stop at nothing until hoodlums and miscreants who are terrorizing school children are apprehended or chased out of our council area,” Olojede said.