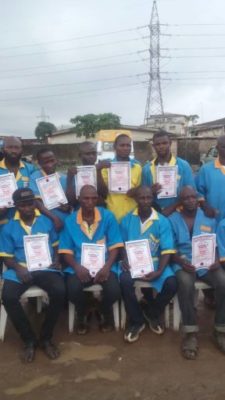 The election process was based on test as each contestant was examined on his ability in mechanical and technical skills in the vocation.

While swearing in the newly elected executive members, the NATA State Patron, Wasiu Jimoh advised them not to misuse the opportunity as they have been elected to represent the chapter.

He said: “Elected members should not take revenge of any evil deeds or record of other members of the association instead the progress of all members and that of the union should be their priority.”

A former Chairman, Ismaila Kolade also charged the newly executive members to always seek advice from the elders and the advisers.

In the same vein, Ajao Estate, Isolo Unit of the association under the chairmanship of Hon. Daniel Ejiofor held the association’s Oshodi-Isolo Local Government general meeting on Wednesday June 26, 2019, at Adewunmi Abudu, Ajao Estate, Osolo Way during which members across the local government area were charged to key into insurance scheme.

The State Secretary, Sherifa Otedola, who advised the members on the insurance scheme, highlighted the benefits therein.