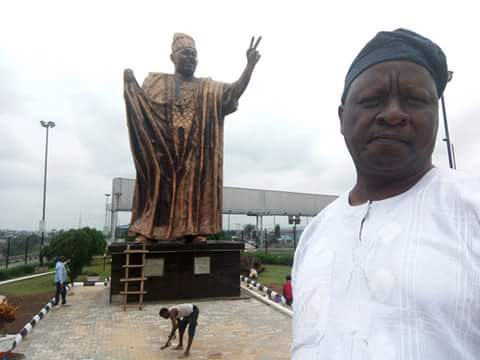 On June 10, ahead of the June 12 commemoration, I met MKO at the park being enhanced and upgraded by the administration of Gov Akinwunmi AMBODE. It was a queer re-union. He was a wooden semblance of his natural being, elevated into the pantheon of heroes that have become the lights on the aisle of our journey into the past. Children will come to this park and ask us about this statue. Tourists will wonder how he earned this place. We shall be able to tell the story of a man who did everything to comply with the system but was forced to confront the injustice that military rule promotes everywhere. 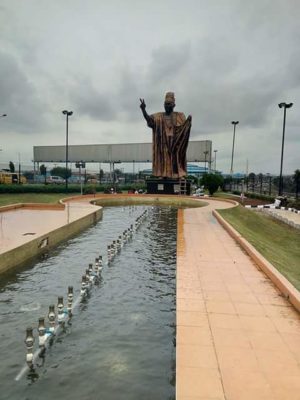 It was indeed a weird encounter between man and effigy. But not unusual. As a twin, the cultural practice of making the effigy of a dead pair to still hold on to the reality that both still exists suffices.

The interaction between the living and the dead takes place on the Platform of the spirit, the “anjonnu” that mediates and populates the extra-terrestrial.

I was in that spirit while the interaction proceeded.

The only time I had an encounter with MKO, it was arranged by my senior in school, now global publisher Dele Momodu. We met him as he made his way out of his home off Toyin Street.

He introduced me as his junior in school who worked with the Vanguard newspapers. And the chief, resplendent in the Agbada, replied in a manner that gave me a good impression. Throughout the introduction, he used the phrases: “E ku Ise, E Pele..” This phrase is the Yoruba’s language of respect to someone who has achieved some status. Distinct from the simple, “pele”, ku ise” depicting normal acknowledgement.

Now if you grew up soaking in Fela Anikulapo’s music and listened to ITT, such an encounter must cause you to rewind and fast forward your thoughts. The encounter caused me to re-evaluate MKO in the context of developing a national bourgeoisie that would see the industrialization of Nigeria as a class conscious agenda. Implicit to that context is the need to provide purchasing power for the masses by ending their immiseration and to fight foreign capital from turning Nigeria into dumpsite for all manner of foreign products.

As I argued in my Master’s thesis, the Farewell to Poverty,  MKO’s manifesto was the ultimate class suicide. He broke away from the conspiracy of stooges of imperialism that held the nation at gunpoint so that it could be exploited and decisively chose to go with the masses.

Governor Ambode caught that spirit. Unaware that President Buhari would surprise the nation with the national award for MKO,  he set his eyes on making MKO a point of reverence for all defenders of the freedom we enjoy today. May his fertile imagination continue to take Lagos forward.