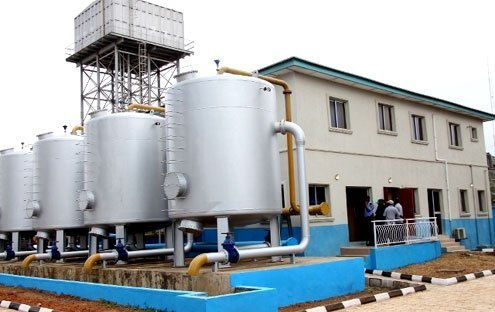 A comprehensive masterplan on Oshodi-Isolo local government area has recommended the establishment of more mini-waterworks and the upgrade of existing ones to fill the huge gap in the demand for potable water.

The masterplan, put together by a consultancy firm, Vistaplan for the state government, identified the low production capacity of the Lagos State Water Corporation, poor water quality, poor water conservation practices and uneliable power supply as factors disabling residents from meeting the 120 litres of water daily standard set by the World Health Organisation.

According to the masterplan, the mini-waterworks in Oshodi should be upgraded.
“The main source of potable water will be from the mini water works within the Oshodi-Isolo LGA compound. The water distribution network consists of pipes ranging in size from 300mm to up to 900mm pipes… The total average water demand in Oshodi is estimated to be about 2.09 million gallons /day. However, it is expected that the mini water works will be upgraded to the capacity of 10mg/day in order to be able to adequately serve the residential population of Oshodi action area and its environs.”

The Lagos State Water Corporation in July announced that the 70 millons gallon per day Adiyan waterworks has begun to supply potable water adding that its engineers were addressing the problems of the 45 million gallons per day Iju waterworks. It is also working on Odomola phase 3, Ibesh and Yewa phase 2.

Recognising that the production capacity of  its three waterworks- Adiyan, Iju and Ishasi – does not meet the rising demand for water, the LSWC over the years established 42 mini-waterworks which take water from the ground to serve residents.

LSWC Chief Executive Officer, Engr. Muminu Badmus once told participants at the World Water Day this year that the corporation was up to the task: “ In recent years, the Lagos Water Corporation has developed a Strategic Business Plan as a road map to take the water production capacity  of the state to 492 million gallons per day by year 2023 to close the water demand gap significantly.”

Manwhile, the exisiting gap is being filled by private water producers and para-public schemes- water from facilities set up by politicians and philantropists.

Four borehole water projects  put up by politicians in Oshodi include  one  by the former Federal House of Representatives member, Hon. Maruf Akinderu (Marf); the other one at Arowojobe  by another former Federal House of Representatives member, Hon. Mutiu Shadimu; the one at Sunmola Abayomi Street, Mafoluku by Hon. Abiodun Ogundimu and  at Ishola Daniel which was done by the current APC member, Lagos State House of Assembly, Hon. Hakeem Sokunle.

In Isolo, Majority of the communities without government provided water or community projects resort to buying from commercial borehole water sellers at the rate of N10 and N20 per bucket depending on the size of the container while many get their own water from untreated well dug by their landlords.

Private producers and sellers of water in bottle and sachets include Aquarite Water, Olasco Pure Water Company and C-Way.

In a chat with ECHONEWS, the Chairman, Community Development Committee (CDC), Isolo LCDA, Alhaji Fatai Abisga, said: “Realistically, there is no government owned water source in the whole of Isolo LCDA. There used to be before now but massive construction of roads have led to the damage of water pipes laid by the Lagos State Water Corporation and no repair was done to them. In some areas, the pipes are intact but not useful.

“There is public water here at Alagbeji, it was recently constructed by Engr. Ganiyu Johnson during his campaign. It is the only source of public water for the community and it’s even confined to residents of Holy Saviour Estate alone,” the CDC PR, Alhaji yemi Shogunle disclosed.

In 2011, the administration of Kehinde Bamigbetan executed a water reticulation plan of 20 fountains sourced from the LSWC miniwaterworks in Egbe. It is also on record that Hon. Jayeola Ajatta  and Hon. Okunleye Gboko established several borehole projects across the community.

How Lagos Water Corporation plans to meet water demand
The first step taken was solving the problem of erratic power supply which has been a major hindrance to production and supply of water in the State. The government ensured that the Independent Power Plant (IPP) of 12.15 MW at Akute Intakes was re-jigged to supply power to Iju and Adiyan waterworks. Aside being connected to the national grid, generating sets were procured to serve the major waterworks as well as the micro and mini waterworks

This regime also took an active step towards combating water crisis in the state by constructing and commissioning the Ota-Ikosi Regional Water Scheme of 4MGD, and the Mosan- Okunola mini waterworks of 2 MGD. These water plants are currently supplying over 10 communities in Agbowa /Ikorodu area of the State.

In addition, this administration used a realistic approach to close water demand gap in the State by carrying out rehabilitation and expansion projects in different parts of Lagos, involving the replacement of old pipes and extension of water mains, thereby increasing water supply in different parts of Lagos especially in Surulere, Itire, Yaba/Ebute-Metta, Iwaya and Victoria Island among others.

In the same vein, there are a lot of proposed projects laid down by this administration to effectively and ultimately tackle the problem of water shortage in the state. These projects include the development of the Igbonla Water Scheme Phase 1 of 100MGD, expected to serve Epe, Eti-Osa, Ikoyi, Ibeju Lekki, Victoria Island and Lagos Island. The second phase of this project is also being planned, projected to produce 110 MGD, with a distribution network of 500km.

Other proposed schemes include Adiyan Phase III of 70MGD, with 6,295 km network, Ibese Phase I Water Treatment Plant of 50 MGD, and the Yewa/Ishasi water scheme calculated to produce 85MGD

In addition, a proposed integrated water supply in Ikorodu and its peri-urbans will be executed to supply 35MGD. This project will comprise upgrading Ota-Ikosi from 4MGD to 31MGD; the rehabilitation of Oke-Ota-Ona Water Plant and Lagos road mini waterworks currently supplying 3MGD and 2MGD respectively.

This integrated water supply project will also include the construction of 7 booster stations that would enhance production and supply of water to the communities in the axis.
It is also worthy of note that recently, the present administration carried out massive rehabilitation of waterworks across the State. This has resulted in an additional 90 MGD to the existing 210 MGD.

The Corporation now produces and supplies uninterrupted water to residents in the State, evidenced by the fact that communities that had never been supplied water for many years are now being supplied potable water. These areas include Ijesha, Makoko, Ikate, Iwaya, Unilag second gate, Odunlami linkage (Lagos Island), Isheri Olowora, Agege, and many others.

However, it is true that the influx of the people into Lagos has continued to put pressure on all the social amenities. This is added to the fact that the population of Lagos is projected to hit 29 million by 2020.

Therefore, based on the present plans and ongoing water projects in the state, Lagos Water Corporation has the capacity to deliver 745MGD, when demand hits 733MGD, giving the State excess of 12MGD.

Considering these efforts put in place by the State, in addressing the dreaded global water scarcity, there is no gainsaying the fact that with the proactive measure being taken by Governor Ambode, water shortage in Lagos State is well on its way out.