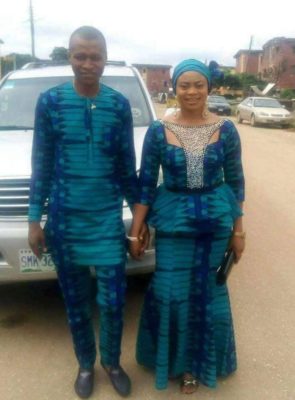 The accused ritualist with his wife

The case of a man who murdered and butchered his wife was reported by eye witnesses who found him with the remains along Balogun street, Oshodi at the early hours of Wednesday.

The culprit had already ripped off the head, breast and some of the intestines before going to dispose the body.

According to eye witnesses, the man murdered and butchered his wife who has two children for him into pieces for money ritual.

Ramadan fasting said caught him while trying to dispose the body early this morning.

The man confessed that he did it for money when he was being beaten by the mob who gathered at the scene.

He was said to have been handed over to the police for further investigation.