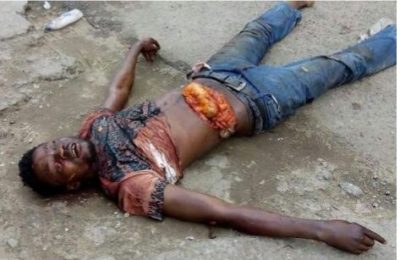 An unidentified lifeless body of a man with inflicted injuries as a result of what appeared like a battering has been found in Aboye Street, Ejigbo, a notorious arena for cultism and other nefarious activities.

The corpse was filled with several cuts and found in a pool of blood in early hours of today, Tuesday, April 10, 2018 as residents of the area identified the victim to be one of the residents.

They informed Echonews that the murder act must have been done somewhere else while the corpse was brought to the area.

The residents reported to the police at Ejigbo Division who evacuated the corpse and deposited it at the mortuary for autopsy report.

When Echonews visited Ejigbo Police Station, the DPO was not around to comment on the matter. However, a police source confirmed the incident and said that the police have since commenced investigation into the matter.

Furthermore, the source disclosed that the police were working on two premises which are the targets of cult activity and armed robbery attack.

As at the time of this report, no relation has come forward to claim the corpse. The police said that no arrest has been made yet in connection with the death.