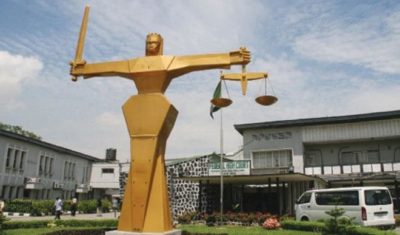 A driver, Emmanuel Okorie, has been arrested by the Police for an alleged defilement of his neighbour’s 15 year old daughter – an act he pleaded not guilty of.

At the Lagos State High Court in Igbosere where Okorie was arraigned yesterday, he was said to have committed the offence when he visited the residence of his sister in Ejigbo on November 26 2015 and nabbed by the Police at Ejigbo Division.

The victim, who was led in evidence box by the Lagos State Prosecutor, Mr Akin George, said that the defendant, who lives downstairs in the same house with her, dragged her into his room and asked if she was a virgin.

She said: “He asked me if I was a virgin, I told him I am. After a while, I saw my skirt down and wet, I saw myself on the bed after he was through with what he did, he opened the door I was crying and he started pleading with me.

“He had sex with me and I was crying and pleading that he should leave me, but he did not listen to me.

“I fell sick, I was crying and went to my friend’s mother’s shop, she asked me what happened. He was at my back begging me to stop crying. He was about to run away when he was apprehended”.

In response, Okorie told the court that the alledged rape act charged against him didn’t happen as there was no penetration into the victim’s genitals, however, he disclosed that he tried making his way via his hand. .

Okorie who was led in trial within trial by his counsel Mr Worer Obuagbaka, insisted that he didn’t make any confessional statement, nor told his investigative police officer that he had sex with the victim.

“This statement you are seeing was not written by me, I was not given any paper to write. l was inside the cell, when a man nicked named Sean Paul, came and brought me out to where the IPO was.

“The the next thing he did was to slap me and then I saw Inspector Amina Adeoye with an envelope and I was asked to sign.

She said: ”On December 1, 2015, a case of defilement was transferred from Ejigbo Police Station to State Criminal Investigation Department SCID, Panti Yaba, and the victim that was defiled was 15-year-old then.”

“I took the statement of the victim and after the defendant’s statement had been taken, we had to refer the victim to Mirabel Center at Lagos University Teaching Hospital LASUTH, she was treated and the report was sent to our office.

Adeoye also told the Court that she read the statement Okorie made at Ejigbo, where he denied committing the offence, adding that she did not force him, to sign the statement.

“He wrote the statement that the girl and her friend were actually coming back from school, when the incident occurred.”

The defendant was first arraigned on a count charge of defilement on December 14, 2015, at Yaba Magistrate’s Court.

The case was adjourned till July 5, 2018 for continuation of trial.