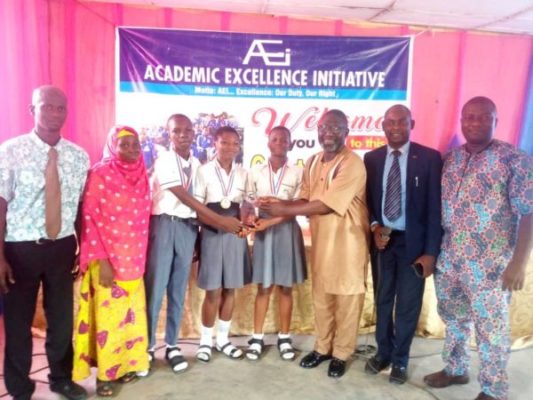 Mafoluku Senior High School has emerged that winner of the 7th Academic Excellence Initiative (AEI) quiz competition having beaten Eric Moore Senior Grammar School in the 5th tie-breaking round of the competition.

The 2019 edition of the annual competition organised Academic Excellence Initiative, a Non-Governmental Organisation, was contested by public secondary schools from Lagos State Education District IV and VI, that is, schools from Surulere, Mushin, Isolo and Oshodi.

In the 5-round quiz competition, questions were asked in various subjects including Mathematics, English and subjects peculiar to Arts, Science and Commercial.

Speaking on their victory, Miss Onuchukwu Chijindu of Mafoluku Senior Grammar School expressed her deep happiness for making her school proud in the seventh edition of the competition.

She confessed that regardless of the fierce nature of the competition, belief in God and team work gave them the edge over other competing schools especially Eric Moore senior High School which came second in the competition.

The champion and the two subsequent runners-up got medals, plaque of academic excellence and educational materials as prizes.

Commending the initiative, the Deputy Director of Education District VI, Mr. Tosin Akinyemi stated that it was a programme that has really impacted so much on students, trying to prepare them ahead of the forthcoming examination.

“I want to say it is kudos to AEI and of course, a blessing for the pupils for having the opportunity to have made it through the processes. Government cannot do it alone, government requires partnership and that’s why AEI has partnered with the government on this platform and I had taken my time to study the nature of questions, right from the preliminary to the grand finale, I can say very confidently that the questions are in tandem with the curriculum,” he commented.

Having commended AEI for the initiative, the Chairman of the occasion, Alhaji Abdul Hameed Solate, Managing Director of Hajj Mabrur Ventures Limited stated that, “the show of academic excellence that has been put to test by schools and individual pupil is an attestation that a lot of effort has been inputted into the educational sector by Lagos State Government. They have put a lot of effort to improve the standard of education and I implore them to continue so that it can get better and better and so that we can bring the glory of the past back in the area of education.”

Speaking more about the celebrated initiative, Mr. Biola Yussuff, the Chairman Planning Committee of the quiz competition, disclosed that the NGO is an idea of some alumni of public secondary schools in Lagos who deemed it fit to support the educational sector in the state and help pupils achieve academic excellence in their educational pursuits.

He further established that the initiative has not only been able to achieve this via quiz competition alone as it regularly holds free seminars, free tutorial, career guidance and counseling to secondary school pupils across its units which consist two educational districts.