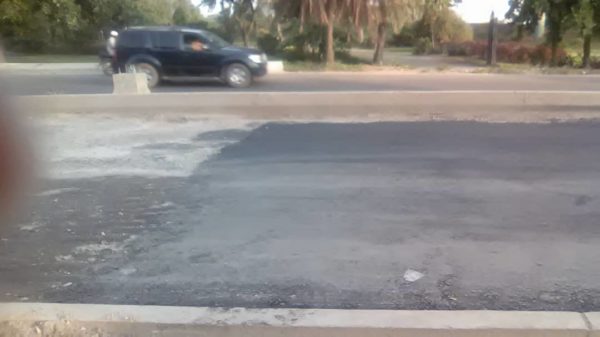 The filing of potholes exploited by criminals to rob unsuspecting commuters by Hitech Construction Company is expected to eliminate robberies around the dreaded Apakun Garden.

Criminal activities have kept increasing at the abandoned Apakun Garden Parks axis at Charity, Oshodi as commuters and residents continue to live in great fear, seeking lasting solution to curb the menace.

It was gathered that the residents could no longer walk freely around the vicinity of the garden as they practically avoid early morning and night movement in that area to keep safe yet, victims are still recorded.

Community leaders have been making effort to restore security to the environment by taking the miscreants off the place by appealing to the concerned government authorities to revamp the garden in order to tame the rape and robbery cases which are always recorded along the expressway adjacent to the garden but their effort has not yielded positive result.

ECHONEWS reported in February, 2019 how the miscreants waylaid unsuspecting commuters in the area, raping, maiming and robbing them of their valuables.

A source told ECHONEWS that for the past two weeks, the big deep potholes at Apakun lane has given the miscreants the opportunity to rob vehicles that got trapped in it.

The source said: “A private car got trapped last week around 7pm, suddenly the miscreants surfaced and offered him helping hands after which they attacked him, beat him up, took his phone and struggled with him to have his bag but they didn’t succeed.”

He further narrated: Another incident occurred on Sunday when a woman took taxi around 9pm on that Sunday night to catch up with her flight at Airport, as the taxi slowed down to bypass the potholes, those guys emerged, jacked the door opened, took her bag and ran away. The woman begged for her passport to be released and take the money but they didn’t listen to her plea.”

However, it was learnt that on Wednesday June 19, the contractor working on the Airport road construction came to their rescue by filling up the big deep potholes to stop the robbery cases the community has been witnessing lately.

One of the community leaders, Engr Joy Omiyale who spoke to our correspondent said the community would not fold hands on the issues, assuring that other leaders and stakeholders would be involved in a meeting to discuss the way out of the ugly incidents posing great danger to the community.

He however advised motorist to ensure that they always roll up their cars’ windows and lock up doors while driving at that area, saying the passers-by should also avoid the road at night.