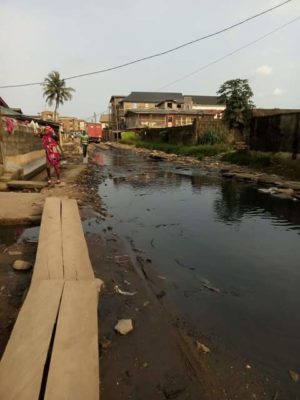 The residents of Mafoluku Oshodi- have decried the insensitivity of the Oshodi-Isolo Local Government Chairman, Bolaji Muse Ariyoh to their plight as they accused him of neglecting the area.
The complaints came following the difficulties and rigours they undergo on some streets due to their deplorable condition which keeps deteriorating.
Speaking on the situation, one of the residents, Amidu Arije said, “This is Old Ewu Road, Mafoluku, Oshodi Lagos.
The street is one of the longest and most popular streets in Oshodi. It has been in a bad state for years; presently it is not passable for motorists and commuters.
Majority of those who spoke on the condition of infrastructure in the area alleged the Chairman of incapability and lack of good administrative skill.
Adeboye Ebenezer submitted, “The local government chairman is an error when it comes to Oshodi, i hate all these politicians with passion, when they are supposed to develop the community they are developing their pocket and promoting stupid programms that are not problem solving!
Prince O. Abimbola said, “Hmmm this is one of the places I used to pass almost every time those days in Mafoluku, imagine still the same way very bad government we have.
Lawal Aduni said, “Firstly, we all know that it’s the responsibility of our inactive Local Government Chairman (Ariyo) but more so, it baffles me when people like you still talk say a particular project is a specific government, hope you remember one of the campaign strategies of APC during the last Election? They said if people can vote their party at Federal, State, and Local for us not to be in opposition, so that there won’t be any stories when it comes to Projects. I’m a student of history.
Olubiyi Mutiu stated, “If my memory is right but if I’m wrong, I stand to be corrected. Fashola visited this area before he became the governor of Lagos State and promised to fix that road.
“The drainage from that street towards airport road through the end of Ilare and Musa Oyingbo Street was actually done. This made the area to be a bit motorable even when it rains.
“At the moment, the drainage is blocked due to many reasons. That’s why it’s reoccurring.
“I kept on wondering, do we have councillors and Chairman in our local government, I mean Oshodi-Isolo local government? The roads that are very good in Oshodi and Mafoluku were reconstructed by the state government. They are: Church Street towards the Oshodi express, Brown Street, Ajibulu Street to mention a few.
“What is our chairman in Oshodi-Isolo local government doing for us in the local government?
“I kept on wondering, did they really exist or may be someone who knows can enlighten me in this regards. Yet, he is still campaigning to represent us at the House of Representatives.
“I am not worried o, worried ke rara o no be me coz I know we will be adequate represented.
“Itesiwaju Oshodi-Isolo lo Jewa l’ogun.”