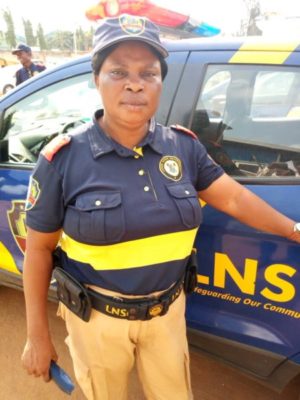 The Lagos Neighbourhood Safety Corps (LNSC) has expressed its readiness to provide maximum security during the 2019 election within its jurisdiction as the law permits it.

Speaking with Echonews correspondent in her office, the Corps Superintendent, LNSC, Isolo Division, CS Adekile Funmilola, said the corps has put in place some security strategies to ensure peaceful atmosphere in the community during the forthcoming election.

She revealed that the Corps decided to make sure that the violence which normally ensued in Isolo during election would not be repeated in 2019, adding that the exercise would be free and fair.

She said, “Towards having a free and fair 2019 election, from our ends, we have drafted out strategies and we have planned to join hands with other security operatives in Isolo to make sure the election is peaceful and fair as everyone will expect.

“As we did during the Local Government elections last year, we plan to double our effort, the election will be peaceful, the community should be rest assured.”

Analysing the achievements of the Corps in Isolo since inception, the LNSC boss noted that the Corps has reduced the activities of hoodlums within the community.

“So far, my scorecard has been great. Since the establishment of LNSC on the 1st of April 2017 and my operation in Isolo, I have not lost any of my 100 personnel, we have all performed greatly.

“The way we are doing it is that all my boys stay closely in their beats. Some ceaselessly do patrol especially the Intelligent Unit, they give us timely information anytime they notice any blackspot. As soon as they bring the information, we will write a report on them. We singlehandedly tackle the unserious ones and alert the police on the serious ones such as those that trade in Indian hemps. Most time we send their reports to the headquarters, from there to the state division and taskforce would swiftly be sent down to that area,” she explained.