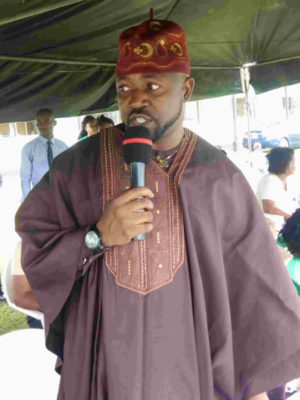 With the recent policy of the Nigerian Financial Intelligence Unit (NFIU) regulating the financial activities of the Local Governments from next month, the Leader of the Legislative Arm, Isolo Local Council Development Area (LCDA), Hon. Remy Shittu Remy, has stated that the local governments need more than the financial autonomy to be more functional.

The NFIU had recently given a directive banning governors, banks, financial institutions, public officers and other stakeholders from tampering with statutory allocations of local governments beginning from June 1, 2019.

In reaction to the relative development, the council leader said that creation of more LGAs across the country coupled with absolute autonomy as well as adequate allocations would make the grassroots governments live up to the expectations of the  residents, making it more functional and executing basic projects the people desire.

In an exclusive chat with ECHONEWS, Remy said the recent NFIU policy which dissolves the State Joint Local Government Accounts (SJLGA) and allows funds and allocations from the Federal Government to be given directly to the local government “will not in any way fast track development in the local government. What it will do is to grant LG financial autonomy and this is just a part of the absolute autonomy the LG direly needs. Full autonomy will mean that there will be creation of more local government areas, that is, the National Assembly will have to push for the amendment of the portion of the constitution that limits the LGAs we have to 774. It will also mean that more funds will be made available for the administration of the grassroots government and not until then will the people of the grassroots have great taste of good governance from the closest government to them.”

Remy further stated that the sharing formula among the federal, state and local governments should be reversed, stressing that the LG has more responsibility to take as regards community development than the other two tiers of government. “With the meager amount the local government is currently receiving, development will maintain its usual slow pace. Talking about road construction in the locality, the best the LG can do on road is palliatives because, if you’re familiar with Isolo LCDA very well, using my Ward for example, most of the streets in my wards are very long that it is only the state that may conveniently be able to construct them. If the LG, out of its sense of responsibility, tries to construct one, it means that it will be putting the entire budget of a year on just one street meaning that other sectors will be left unattended to.

“If the LG attempts to focus on the standard construction of one road, that which is very unrealistic, in a particular place it will be contravening the Local Government Administrative Guidelines 2011 as amended, which states that there must be geographical spread of developments among the wards in the local government.

He emphasised that the financial sharing formula needs to be reversed because the LG has more roles to play in the development of the community, saying that with the current sharing formula and number of LGs the county has, development, as desired by people of the grassroots might remain unrealistic.

Remy noted that the major reason for the NFIU policy is to detect and protect money laundering and terrorism financing at every level of government.

However, beyond financial autonomy the LG has been given, Remy maintained that the way to make governance get to the people to make them enjoy great dividends of democracy is by increasing the number of LGAs, making sufficient funds available to them and granting autonomy to LG administration.