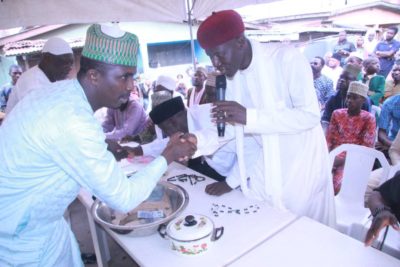 There were praises and prayers at the one year remembrance of the Late Chief Alhaji Razak Bello, the Akirogun of Shogunle and Akile of Ewu land (Aka Hamburger) who was murdered last year as people kept on making reference to his good deeds while alive.

At the remembrance ceremony held at the deceased’s residence at Shogunle Oshodi the Chief Imam of Ajumonire Central Mosque, Ladipo and National Missioner of Jundulahi Islamic Society, led the prayer for the departed soul, Bello had already prepared for his Aljanna with his good deeds while on earth. 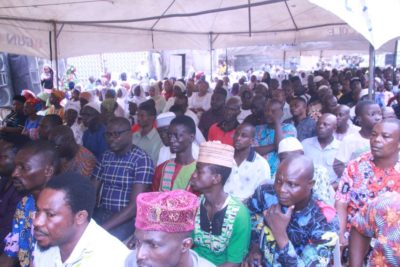 The clergy man however sought God’s forgiveness for his shortcomings, saying he would have committed sin no matter how minute while living.

He clarified that every human is liable to to sins being infallible creatures that they are.

In his sermon, Alhaji Hamza urged everybody to emulate the late Alhaji Bello on his good deeds to his community and humanity as he preached that each person would taste death one day at no specified time by Allah.

Quoted Q3v185, he said, “Every soul will taste of death. And ye will be paid on the Day of Resurrection only that which ye have fairly earned. Whoso is removed from the Fire and is made to enter Paradise, he indeed is triumphant. The life of this world is but comfort of illusion.”

Majority of the dignitaries present at the occasion eulogized the virtues of the late Akinrogun of Shogunle as they reminisced on his life, praying Allah to grant him Aljanah fridauz.

The immediate elder brother of the late Bello, Alhaji Fatai Bello, on behalf of the family, appreciated all the guests and members of the community for the love they showed to the family as he preached for more peace within the community.

“We appreciate you all for the support you have given to the family. May Allah never make any of you witness this kind of shock experience. It’s painful to us but as people who truly believe in Allah and His book, we believe that Allah knows best.”

He further advised the people of the community to continue to maintain peace and live in harmony with one another.