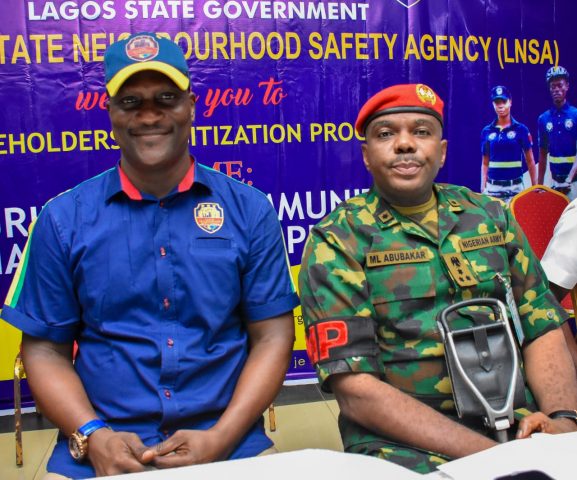 While speaking at the interactive stakeholders forum of the Agency held at the Onikan Youth Center, Ifalade said the Governor Babajide Sanwo-Olu
administration at inception planned and is executing a master plan in various
facets of the life of the State with special attention on safety and security.

Prince Oyekan while explaining the routine of the Crowd Management and Anti Riot squad display at the event said” Governor Sanwo-Olu recently approved the establishment of new units including the Forensics, Forest Rangers, Marine,
Technical and Mechanical Units among others to enhance the services of the
Agency and the Governor also purchased drones to enhance the intelligence
gathering capabilities of the LNSC, the uniformed arm of the Agency”.

At the event with the theme, “Securing our communities, I have a role to play”, representatives of various Stakeholders including the Army, Navy, LASEMA, FRSC and the citizens also spoke extensively on their experiences with the Agency and its officers.

The Lagos Island sector of the Federal Road Safety Commission, represented by
Mrs. Adekunle while commending the LNSA said: “Security is the business of every member of the society and commended the synergy enjoyed by Law enforcement agencies in Lagos state.”

Adejumo representative of the Lagos State Traffic Management Authority said
the people needs to aid Law enforcement agencies in the bid to ensure safety
and security while enumerating areas the Agency help in ensuring safety and
security.

In the same vein, the representative of the Lagos State Emergency Management Authority,p Engr. Salami said his Agency value the first responders role of the Neighborhood Officers while requesting advocating an expansion of the collaboration with the Agency.

The Commander of the Rapid Response Squad CSP Egbeyemi, who was represented b Superintendent Oluwaseun Phillips said the LNSA is their best collaborator in
the fight against crime in the State, while Lt. Commander Godwin Egbunum who
represented the Nigeria Navy said uniformed personnel in the State must learn to execute their duties with the principles of espirit de corp to sustain the synergy established in the State.

In his goodwill message, Brig. Gen. M. L. Abubakar who represented Maj. Gen
Obina Ajunwa, the General Officer Commanding 81 Div of the army said enjoined Law enforcement officers to be above board in their behaviours and interaction with the public in order to earn the respect of the people.

Prince Ifalade Oyekan concluded that the forum will be a continuous programme
and tour the length and breadth of Lagos State to sensitise and mobilise the
people of the State against crimes and criminalities.