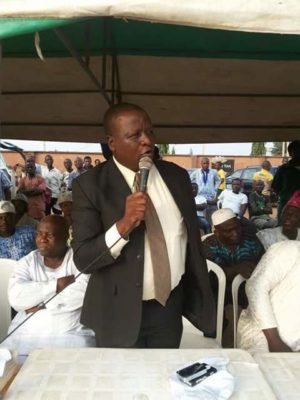 Following the resolution of the party leaders to adopt Babajide Sanwoolu as the All Progressive Congress (APC) flag bearer for the Lagos State gubernatorial election in 2919, the Lagos State Commissioner for Information and Strategy, Hon. Kehinde Bamigbetan, has openly dumbed the embattled Lagos State Governor, Akinwunmi Ambode, and declared total support for Sanwoolu.

Bamigbetan, who made the declaration on Monday at his Ejigbo residence, told his followers and party leaders and members in Oshodi-Isolo that Sanwoolu must get 100 per cent votes during the party’s gubernatorial primary election which would be held on Tuesday, the 2nd of October across the state.

While addressing the party members, Bamigbetan stated that his action was precipitated on the majority’s decision of the party leaders and the directive of the party National Leader, Asiwaju Bola Ahmed Tinubu.

The Commissioner thereby ordered the party leaders under him to mobilize the entire members of APC in Oshodi-Isolo and Ejigbo to cast vote for Sanwoolu.

He reiterated that his loyalty remained for the party National Leader, Bola Tinubu, and the party as whole, saying he could not do anything contrary to the party’s directive at this point in time.

It was learned that the commissioner, together with other party faithful in the Ambode’s cabinet, had been acting on instructions all the while.

He explained that the action of the commissioner was expected and that it was long due before the decision was made.